That's it pop-tart, I'm going to dog pound you straight to China 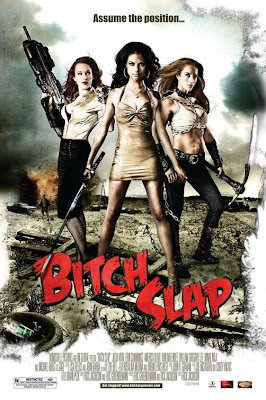 Hello I am the movie encyclopedia and if no one else will see it, I will.
I will always have a soft spot for exploitation films past AND present. Sure nowadays most of them are really indie and hard to find or Hollywooded like House of 1000 Corpses or Grindhouse but they still hold a place in my heart no matter who makes them or who distributes them. So when I heard that Rick Jacobson, of B movie fame (although he is directing Starz new series Spartacus Blood and Sand) was creating a campy exploitation film with three chicks and calling it Bitch Slap I was all over it. But does it live up to the standards of the classic exploitation films? Sadly no...but it's still a fun ride.
The story of Bitch Slap is about Hel, Camaro and Trixie, three chicks with bad attitudes and even bigger guns who are out in the middle of the desert to exploit a seedy underground kingpin for all he is worth. Things quickly go to hell and the s**t hits the fan rather quickly. Guns are fired off, double entendres are spewed out at rapid fire, cleavage flies around, people get dirty and its a big action clusterf**k. Things even turn sci fi when its revealed that one of the characters may or may not be human.
Basically its the campy silliness that you either love or hate about these movies. If I can say this with a straight face the "plot" is a bit all over the place, even for exploitation standards. Sometimes the film is head scratchingly hard to understand. But most of the time you'll just be laughing at the dirty jokes and admiring the action which is all done quite well. The cinematography and the editing really stand out as being top notch in this film and I really appreciate it in a film like this that relies on style over substance.
So should you see Bitch Slap? Well while there are plenty other better exploitation films out there I admire the directors ambition and tip my hat off to him. He created a film that's both action packed and a true guy movie in every sense. Guns, babes and dirty jokes. Heaven.
MY VERDICT: RENT IT.
Posted by xTJMac510x at 2:28 PM