Enough of symbolism and these escapist themes of purity and innocence. 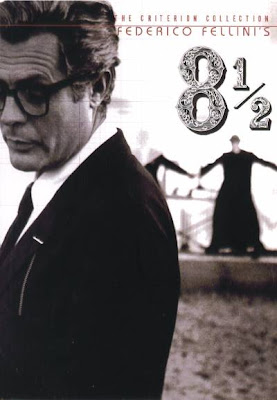 Hello I am the movie encyclopedia and if no one else will see it, I will.
Fredrico Fellini was quite the director. Yes he had his issues with fidelity and drinking (then again so did most of the "greatest" authors of our time) but he was a brilliant visionary. Whether you were a devout fan of his older work and a scoffer of his ladder work or were just a casual fan, his films captured you with their creative style and a subtle flair that made his films quite entertaining to watch. Fellini has inspired many modern directors and most of his films now are considered art and a major part of Italian culture. But when you think of Fellini what do you think of? Non film buffs are probably like "Who the hell is he?" and even some film buffs say "Who the hell is he?" But considering most of his work was IN Italian and had no (sometimes brief) run in American cinemas I don't blame a lot of people. In fact I will be one to admit that the first Fellini film I ever saw was this: 8 1/2.
8 1/2 is a semi autobiographical film starring Claudia Cardinale and Marcello Mastroianni dealing with Guido Anselmi. Guido is a director suffering from director's block. He is in the middle of making a science fiction film that hints at potentially personal problems that Guido himself faces when he just becomes apathetic. He loses interest and can't seem to focus long enough to finish it. As he half heartedly attempts to make the film we are seen flashbacks of his life and what led up to this moment.
8 1/2 is called 8 1/2 because it is Fellini's 8 1/2th film. He made 6 previous films, 2 short films (which he considered halves) and collaborated with another director (another half). This is an allusion to the autobiographical tones in this movie. Its very self reflective and, in my opinion, a recursive film. Its a film about making a film. And despite posting on his camera lens "Ricordati che e un film comico (Remember this is a comedy)" the film comes off more serious than funny although to Fellini it MAY actually BE funny.
I think my major gripe with the movie is that it is too deep. I know that sounds weird coming from a Blade Runner worshiper but this film requires a LOT of analysis and double checking and watching again and again to understand it. I think its due probably to the fact that (like its musical counterpart Nine) it lacks in the coherent plot department. Its more of an umbrella plot with events happening in between. That's not a bad thing per se but it does make it hard to sit through the film as a casual viewer instead of a film scholar who would get the most out of the movie.
If you haven't seen this film I would definitely recommend seeing it. Its an experience and really does capture the idea of the creative struggle and while it lacks a truly coherent plot and may be a bit too deep for casual viewers, its a film that really does deserve to be watched.
MY VERDICT: SEE IT
Posted by xTJMac510x at 11:43 PM