Let off some steam, Bennett. 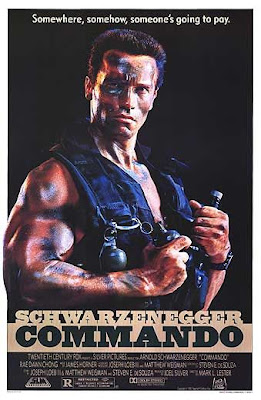 Hello I am the movie encyclopedia and if no one else will see it, I will.
Well as a lot of my close and personal friends know I am a huge fan of The Nostalgia Critic. And in fact he is one of the reasons I created this blog. So when I started having trouble figuring out what would be my next movie review (or reviews) I turned to him for advice. Doug Walker (the Nostalgia Critic) has declared it Arnold Schwarzenegger month and that's great for me because I love me some 6'2 mumbling Austrian (that came out wrong). Whether you want to admit it or not we all love Arnold. He is the reason we love action movies. He is loud, abrasive, no holds barred, spews out one liners like nobody else can and is arguably one of the best worst actors of our time. If that confused anybody let me explain:
Arnold is NOT a good actor. Put him next to Daniel Day Lewis or Edward Norton and its pretty obvious who the better actor is. His delivery is spotty, his only emotions are pissed off and WAH WAH WAH goofball, his accent makes him almost incoherent, he looks the same in every movie he chooses horrible films and his one liners (while awesome in their own way) are almost cheesier than Horatio Cane.

But the thing that makes Arnold great as an actor and one of my personal favorites is that he is TRYING. I can't tell you how many movies I have seen where perfectly good actors phone it in or just BS a part for a paycheck. That's not Arnold. Whether he is a pregnant man, a military commando or a business man he always puts his heart and soul into each and every film. Granted its not very good in comparison to other actors but Arnold always TRIES. So I guess in tribute to Arnold as well as the Nostalgia Critic I will review my top 10 Arnold movies of all time starting first with one of my favorite guilty pleasures: COMMANDO.
Commando is the story of John Matrix (Arnold) a single parent with a daughter Jenny (Alyssa Milano) who is also a former Colonel who once led a special forces team. One day he is approached by his old friend who tells him his former teammates are being killed. Not soon afterwards his house is ambushed and Jenny is kidnapped. Unless he wants Jenny to die he must assassinate the president of a foreign country to help out a guy named Arius. Matrix complies but since this is a Schwarzenegger film that means he will comply for two seconds and then blow everything up and kill everyone.
If you are expecting an Academy Award winner you aren't going to get one. But what you are going to get is a totally kick ass 80s action flick. The one liners are great, the action is over the top and awesome and Arnold is just in top form. Granted there are nine other Arnold films I prefer over this one but this is still an amazing movie. It's textbook action movie. In fact I think this film wrote some pages for the action movie textbook because I have seen plenty modern day action films rip off Commando.
So if you love action movies, cheesy one liners, Arnold Schwarzenegger, or just want to watch a movie where stuff blows up (Michael Bay fans I'm looking at you) then check this picture out. Classic Arnold.
MY VERDICT: SEE IT
Posted by xTJMac510x at 11:44 PM