Cohaagen, you got what you wanted; you must give those people air! 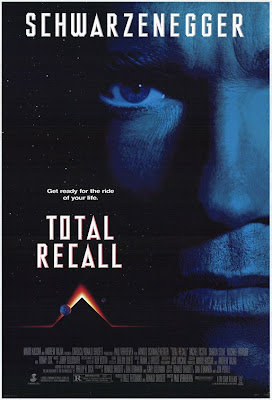 Hello I am the movie encyclopedia and if no one else will see it, I will.
Along with Stephen King one of my favorite authors of all time is Phillip K Dick. If you don't know Phillip K Dick is famous for writing great sci fi stories like The Minority Report or We Can Remember it for you Wholesale (just to name a few). Of course since his stories are so well made and have such great futuristic stories it would probably come as nobodies surprise that they would be made into movies. Granted everyone's heard of Steven Spielberg's Minority Report which came out a few years back but one that a lot of people know but maybe didn't know was an adaptation of a Phillip K Dick book was 1990's Total Recall. Yes that Total Recall. For some reason (in my circles at least) Total Recall is considered one of the greatest sci fi films of all time and one of the movies with the highest body count. Its also famous for something else...being an awesome Arnold Schwarzenegger film and if nothing else probably his best actual acting performance. Yes he is a great action star but for the most part his acting can be cheesy. Its genuinely awesome in this one.

The story of Total Recall (based on We Can Remember it For You Wholesale) is that of Douglas Quaid. He is happily married to a wonderful wife (Sharon Stone) has a good job as a construction worker with his buddy (Robert Costanzo) but has bigger dreams. He's lived on Earth all his life and wants to explore other colonies and other planets. He decides to go to a company called Rekall which lets you take a fake vacation. While there he learns that he had already been implanted with a memory device which had erased his memory of the past two months. He then learns that he was a resistance fighter and that his wife and friends are out to kill him. He wants to survive, learn the truth and take down the bad guys. If you know Arnold movies than you know what comes next:
Total Chaos, lots of blood, people exploding, gunfire, human shields and one liners. But its all done in a way that is totally amazing to watch. The story is genuinely interesting to watch and its fun to see how it pans out. The supporting characters are great and the villains are deviously awesome. From minute one to the end its a well acted and well done sci fi action film. In fact it even won an Academy Award for its special effects, an award this movie definitely deserved.
So if you like sci fi action thrillers or just action movies in general or want to see an Arnold movie where he is almost too awesome than check out Total Recall...and Phillip K Dick. His books are amazing.
MY VERDICT: TOP FILM
Posted by xTJMac510x at 12:57 AM