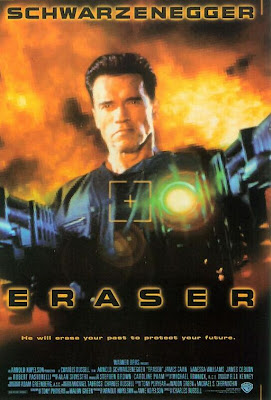 Hello I am the movie encyclopedia and if no one else will see it, I will.
Well time for number eight on my Top 10 Arnold Schwarzenegger countdown and today we are going to talk about one of his nineties action movies known simply as Eraser. By the time the nineties rolled around Arnold had already established himself as a badass among men and arguably one of the best action stars around. In the nineties classics such as T2, Total Recall and Last Action Hero came out so it was pretty safe to assume that his career was pretty cemented as an awesome action star. Granted he also made Junior, Kindergarten Cop and Jingle All the Way in this time period also cementing him as a walking punchline but we always remember his action movies more anyway.
Enough rambling now onto the action. Eraser is the story of US Marshall John Kruger who has the delightful nickname of The Eraser. He works specifically for WITSEC (aka Witness Protection Program) and has just been recently given the job of protecting scientist Lee Cullen (Vanessa Williams...stay with me) She works for the Cyrez Corporation who makes military weapons. When Cyrez plans on selling electronic pulse rifles to Russian terrorists, she finds out and becomes the only witness to their evil plan. William Donahue (James Cromwell) now wants Lee dead and so WITSEC sends Kruger to protect her. Essentially chaos ensues, stuff gets blown up, people get shot, trains get derailed...the usual Arnold stuff.
What I enjoy about this movie is the speed. I know that sounds weird but its a fast paced action movie. Its a Michael Bay movie before Michael Bay except that it doesn't suck (BURN). The gunfire is fast paced, the one liners are snappy and actually clever, and Arnold has mastered the art of badassery. Vanessa Williams detracts a lot from the awesome as she really can't act all that well but great character actors like James Cromwell and even James Caan make up for her lackluster performance. The scale of the film is also quite well done.
Overall its a great 90s action movie and while not his best film ever it certainly showed everyone that Arnold just gets better with age it seems. So if you love Arnold action then check this one out.
MY VERDICT: SEE IT
Posted by xTJMac510x at 12:39 AM