You can live knowing that the woman you loved was hunted down, or you can join me. I promise you will have your revenge. 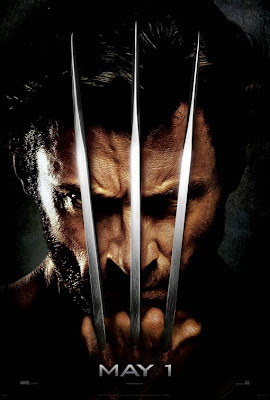 Hello I am the movie encyclopedia and if no one else will see it, I will.
Meh...What you expect more?! Fine I will elaborate on this meh. Fox Studios had a good thing going with the X Men series. Granted while the first two were good, the series took a serious plunge with the third one. But because people like loud exploding things that means that the film made a truck load of money. So it came as no one's surprise that there would be another movie. But since the third one was kind enough to *spoiler* kill off almost everyone, there was no way to actually do a decent sequel. So what do they decide to do? Go the prequel route and hope for the best. And because Fox are actually quite good at making money off their films they decided to make the film about the most popular character in the X-Men series: Gambit. Yep Gambit finally makes his debut. But since that was too awesome and would cause mass chaos they instead called it X Men Origins: Wolverine named after the SECOND most popular character. Can you tell I love Gambit? Anywhoo the story is pretty straightforward for those who have READ the comics. For you non comic fans you may be a little confused as the story insinuates that you saw the last three movies and read the comics. But fear not I will straighten it out.
Origins is the story of two brothers (Hugh Jackman and Liev Schrieber). They are mutants with the power of immortality...basically. In other words their healing capabilities are so astounding that they reach 40 and stop aging and don't die from bullets or diseases. Anyway they decide to become assassins working for William Stryker and team up with a group of deadly mutants. When one of the brothers (who would later become Wolverine) has a moral dilemma and quits the group for a life as a lumberjack with the woman of his dreams. When his brother (who would become Sabertooth) kills the woman of his dreams he gets an offer from Stryker to become the ultimate weapon...which backfires on Stryker when he becomes a killing machine known as Wolverine. So with revenge on mind Wolverine must hunt down his brother and avoid Stryker.
Admittedly the plot (to me) wasn't that bad. But for those who have no knowledge of X-Men it could REALLY be a distraction. My major gripes with the movie were the useless cameos. Besides Gambit most of the other cameo characters get whacked. That's when the "What the hell continuity of the series Fox" problem comes back in. Also there seemed to be a lot of filler and exposition scenes that were totally unnecessary. The movie realistically could have been 85 minutes without all the crap parts shoved in there.
But while it may seem I'm being too nice to it its because it's not that bad of a movie. Yes its mediocre and the acting is cheesy and the effects are silly and the plot holes are huge and ect ect but its not THAT bad. I certainly don't recommend it and I'd advise that you stay far away from it, but its not a total abomination. If you MUST see it, fine but you were warned...it's NOT a good movie.
MY VERDICT: AVOID IT