You wanna be a farmer? Here's a couple of acres! 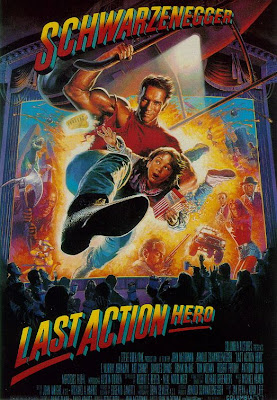 Hello I am the movie encyclopedia and if no one else will see it, I will.
YOW! Welcome back to the number 9 addition of my top 10 favorite Schwarzenegger films of all time in celebration of Schwarzenegger month. This time we are tackling one of his lesser loved movies but still a classic in my opinion Last Action Hero.
Last Action Hero is the story of Jack Slater. Jack is a tough as nails cop who will do anything and everything inside and outside the law to catch the bad guys. He's the guy with nothing to lose ect ect (insert clever action movie trailer sentence here). There is only one major flaw with Slater. He is not real. Jack Slater is an action movie character played by Arnold Schwarzenegger. So let me get this straight...Arnold Schwarzenegger is playing himself playing Jack Slater? Oh boy I am too tired to be reviewing this. Anyway the story REALLY focuses on Danny Madigan a New Yorker who loves movies. He pals around with Nick played by Robert Prosky who owns the theater. One day Nick gives Danny a magical ticket that transports Danny into a Jack Slater movie. Now with Danny in the film, Jack and Danny now have to both solve crimes together and Danny has to find a way to get out.
You know what I love about this movie? The movie world. Everything about it is made for a movie buff like me and every time I watch it I still laugh out loud. Seeing Robert Patrick as the T2, Sharon Stone from Basic Instinct, Stallone on the cover of Terminator, and the wild stereotypes and tongue in cheek pokes at the industry make this movie awesome to me. The acting (aside from Arnold) is honestly pretty subpar and kind of boring in some spots. Danny comes off as a whiny know it all sometimes and the villain is kind of uninteresting. Also another big flaw with the movie is the useless cameos. It was like they were there to be there. It made no sense for some of them to be there and was kind of distracting.
But besides the aforementioned jokes what makes this movie awesome is Arnold. Arnold is awesome in this movie BECAUSE he is playing ARNOLD. He gets to be the stereotype that everybody knows and love. He spews one liners, is totally ignorant to the real world (even butchers his own real name), blows things up, uses doors when he feels like it and is just awesome to watch. If you go into an Arnold movie you know what to expect.
As much crap as we give him Arnold is always in top form and while this movie has some seriously weird plot holes/situations/cameos that detract from the awesomness, this is still a great Arnold movie and number 9 on my top 10 Arnold movies of all time.
MY VERDICT: RENT IT
Posted by xTJMac510x at 12:14 AM