Just get through the goddamn day... 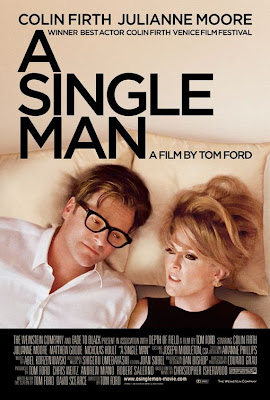 Hello I am the movie encyclopedia and if no one else will see it, I will.
Tom Ford is a name that most women know by heart. Guys scratch there heads and gays rejoice in one of their idols. Tom Ford has been a very influential stylist and designer for a long time but everyone has to evolve. So evolve Ford did but instead of doing a runway show on Lifetime or Bravo he decided to make a movie based on an under appreciated Christopher Isherwood novel called a Single Man.
A Single Man is the story of George. It's November 30, 1962 and its the day he says he is going to commit suicide. He is a British professor who is struggling after his partner died suddenly 8 months ago. George is fixated on the past and thinks his future is an empty void. He plans on meeting with his best friend Charley for dinner buts gets sidetracked by a Spanish prostitute and a young student who becomes fixated with George.
If this film looks like Mad Men then don't be surprised when I tell you it was made with the same phenomenal production team behind it. Tom Ford financed the movie himself and hired the best people he could to help him out. It shows in everything in the film. Everything LOOKS authentic and time appropriate. Everything feels like the 60s and it adds a lot to the film. Colin Firth's George is brilliant. While Firth isn't exactly on my radar as a great actor (I did like him in Bridget Jone's Diary though) this almost totally changed my mind. His performance is deep, thoughtful and he really pulls you in with his performance. Julianne Moore and Matthew Goode add a lot to this movie as well. While both their parts are a bit smaller they do mean a lot to the plot and add some serious depth.
This film is one that is really style AND substance. It mixes all of it together to create a deep, well acted masterpiece. I recommend this to anyone who likes a little flair with their film.
MY VERDICT: OWN IT
Posted by xTJMac510x at 2:26 PM