I want to talk about how bad you make this room look. 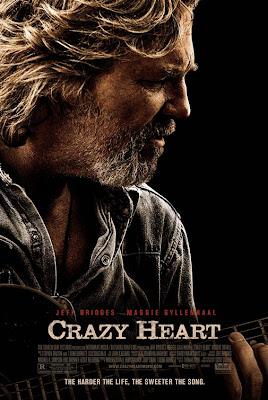 Hello I am the movie encyclopedia and if no one else will see it, I will.
Do you remember the Wrestler? Mickey Rourke played a down on his luck wrestler who had a crappy life, would do any gig that came his way, only found solace in one woman, a hooker whom he deeply cared for, and was desperately trying to find meaning in his life. Well switch out wrestler with country music star, Rourke with Jeff Bridges, and hooker with journalist and you got Crazy Heart. I'm not saying that it's a bad thing but it's hard to deny the similarities in plot. But that's not to say it's a bad movie, in fact it's a great movie which is only helped by the inclusion of the Dude himself, the extremely under appreciated Jeff Bridges.
Jeff Bridges plays Bad Blake, a country star who has been married more times than he can count, has had more drinks that he can count and has had more gigs than he count. He has spent countless years on the road and that is really affecting him. Blake finds that he needs someone to reach out to and that person is Jean (Maggie Gyllenhaal) a journalist. Jean is trying to figure out what makes Blake tick and figure out the man behind the legend. Blake is trying to find redemption but finds out that it is harder than he thinks. The story is good but like I said it does mirror the Wrestler pretty close.
The acting is great all around but Jeff is amazing. I've always had such respect for him and he just reeks awesome in this movie. If nothing else he makes this film worth watching. Maggie is great but when compared to Jeff not so much. All the other supporting characters are good but Maggie and Jeff are definitely the two standouts of the film.
Overall though its not the best movie plotwise but acting wise you can't get much better. Jeff certainly deserved that Oscar win and if for nothing else see the film for Jeff.
MY VERDICT: OWN IT
Posted by xTJMac510x at 9:08 PM