I knew He'd send you, Gabriel. You were always so eager to please Him. 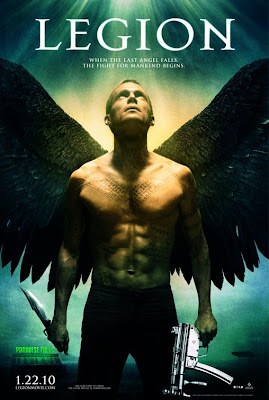 Hello I am the movie encyclopedia and if no one else will see it, I will.
I'm usually not one of those people who falls for hype. I truly believe that you can't judge a movie based on other reviews or trailers or badass posters. But every now and again a movie comes along that totally makes that last claim total BS. Legion is one of those movies. Ever since the now infamous red band trailer came out, one of the few trailers that not only reveals the entire plot (including the death of a main character) but also is 5 MINUTES LONG I have been eagerly awaiting this movie. I'm a huge supporter of Kevin Durand movies as well as Paul Bettany. So to see that they were making a movie with both of them in it and it involved angels shooting the hell out of each other (religious action movies are in right now) I was hyped. Even after reading a review from my friend Nick Jobe over at R2D2 I was still convinced that I must see it. I need to listen to Nick more often.
Now don't get me wrong Legion is not a crappy movie. In all honesty its not THAT bad. What this movies main problem boils down to two things: it tries too hard and it leaves too many questions. The former happens rather quickly in the movie with references to Its A Wonderful Life, a cross burnt into a building ect but it builds in the movie and grows and grows until its like you are watching overacting 101 and bad cgi 101. The latter happens a lot in the movie to the point where it's head scratching. The movie is based around God being fed up with the world and opting to destroy it. Now I am a Christian (don't hate) but I think even atheists would agree that if a "higher being (God)" wanted to end the world...he could. There is no logical reason God can't destroy everything in a blink. There is no reason to send demon angels (irony) out to kill everyone. And why this one woman? Why is her kid that special (I realize he IS the ONE but what does that entail him to do?)? Why kill a character offscreen when they are in most of the movie? There are too many why's and the script is too weak to support there being all these questions.
I'm getting ahead of myself. I SHOULD explain the plot. God is pissed off at the world and decides to send angels to destroy it. Michael (the angel) decides to help protect the only chance at survival in a small town called Paradise falls where a woman named Charlie apparently is pregnant with THE ONE. Fighting ensues....
You'd think with a plot that simple there wouldn't be that many questions! Oh well... Either way Legion is not a BAD movie. The action is awesome, some effects are cool, Kevin Durand kicks ass, Paul Bettany is a good actor, Dennis Quaid doesn't suck and its not that long. But with all the questions, the bad script, weak plot, spotty special effects at times and a total case of trying too hard this movie doesn't warrant anything other than a rental.
MY VERDICT: RENT IT
Posted by xTJMac510x at 2:59 AM