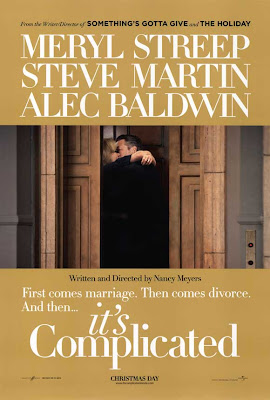 Hello I am the movie encyclopedia and if no one else will see it, I will.
Romantic comedies are really a dime a dozen nowadays and its the predictability of it all that bothers me. Considering almost 100 of these movies are made every year can't more than one or two be original? Are we really that out of ideas that we go to the same plot outline over and over? Well thankfully Nancy Meyers new movie breaks enough away from that mold to make it a fun movie that, although has some dry and boring spots, is an enjoyable romp.
The story of It's Complicated is actually not that complicated. Jane (the wonderful Meryl Streep) and Jake (the talented Alec Baldwin) are a divorced couple and have been for ten years. Jane runs a bakery and Jake is married to his former mistress with a new son in kindergarten. When Jane and Jake's youngest son graduates from college they happen to collide the night before at the hotel bar. Without his wife and nobody to supervise Jane and after about 6-9 drinks they have sex. Jake is happy and thinks things should go back to the way they were. Jane repeats to herself, for half the movie at least, that it was a mistake, a bad idea and they shouldn't have done it. But things actually DO get complicated when Jane's contractor (Steve Martin) falls for her.
It's mostly your typical rom com affair but its made different because of three things: one-it doesn't pull any of its R rated punches, something most other rom com's don't dare to do. Two-it has the comical timing of Meryl Streep, Alec Baldwin, Steve Martin and John Krasinski. Three-Nancy Meyers writing. But all that together and you get a quite enjoyable movie. Alec is on rapid fire mode in this movie spewing sarcastic line after line. Streep is a bit more reserved in this movie but still does quite well. Martin is underused and played as the straight man but he does bring some good comic moments.
So what keeps the film from being great? Its really boring in places. Its a two hour movie that could have been 89-90 minutes. For every great comical scene, funny gag or great story piece the film puts in at least one scene of pointless (I'm serious I'm not being rude here) dialogue that doesn't add ANYTHING to the plot and at least one scene of Meryl going "What am I doing? This is wrong, its a mistake" for ten minutes. Most of to all of those scenes could have been cut and this would have been a five star film. The writing is witty and sharp but the excruciatingly long and boring scenes REALLY take a lot away from the film.
Overall though its a good romantic comedy that changes enough from the norm to make it interesting. If you like the actors or the director or if you just like a good laugh then check this one out.
MY VERDICT: SEE IT
Posted by xTJMac510x at 9:42 PM