I Want To Tickle Your Belly Button... From The Inside 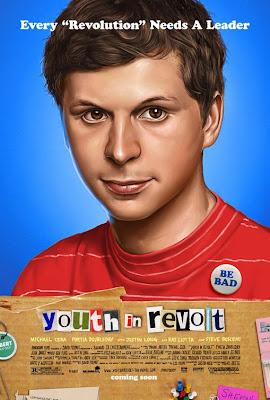 Hello I am the movie encyclopedia and if no one else will see it, I will.
I'm tired of Michael Cera, I really am. Usually I don't swear in my reviews but shit or get off the pot man! Cera has played the same character in EVERY movie for his ENTIRE career as an actor. He plays the socially awkward but lovable geek who listens to indie music, swears like a sailor on occasion, grows a pair during the climax of most of his movies and always gets the chick. I realize a lot of actors get away with playing the same actor but most of them would kill me in a fight (Steven Seagal, JCVD ect). Cera is a buck 15 maybe and would probably blow away in a strong wind. I just don't see the appeal of a guy whose voice can't seem to reach puberty. But what I say doesn't really matter as he will keep on playing the same character and he will keep on being awkward and he will still be a star.
Anyway onto his new movie Youth in Revolt. Basically the plot is based on a book by CD Payne and revolves around Nick Twisp. He is a socially awkward kid who doesn't fit in and feels out of place. His parents are divorced (Steve Buscemi what are you doing here?) and his mom is involved with a couple of guys who are total jerks. He meets Sheeni, a cute girl who Nick falls in love with. The problem is Sheeni has a boyfriend already and isn't interested in Nick...since he is a total wuss. So he creates Francois Dillinger, a badboy who gets Nick in trouble with the law and into Sheeni's pants.
It has its funny moments mostly involving Zach Galifianakis, Ray Liotta and Steve Buscemi but the movie just doesn't warrant that many laughs. Its downright depressing in some parts, Cera is a total loser in this part, the story plods along and I was bored for most of it. Sure I had a few laughs but I just didn't think it was that good.
So if you are a fan of the book or enjoy Michael Cera or any of the members of the cast be sure to rent this when it comes to DVD.
MY VERDICT: RENT IT
Posted by xTJMac510x at 2:22 PM