I'm not into politics. I'm into survival. 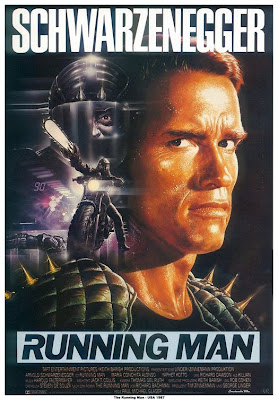 Hello I am the movie encyclopedia and if no one else will see it, I will.
My number six pick of Arnold favorites is a movie that most people kind of remember and if you said the title they'd know who was in it but not what its about is Running Man. This is not only one of my favorite Arnold movies but its also one of my favorite action movies of all time. Granted it has major flaws (in the plot hole and acting department) but its still amazing.
Ya wanna know why I love Running Man? It's for numerous reasons: First is that its based on a Stephen King novel. Somewhere down the road when I review more King based movies you'll notice something about me; I love Stephen King. I have read every book that he has written under every name. I say that because The Running Man was written under the name Richard Bachman and was the finale in the "Bachman Books" series. The second reason I love it is that The Running Man, in my opinion, was the Death Race and Gamer before they ever came out. Before you correct me on Death Race (I know its a David Carradine sci fi film) realize I'm talking about the remake. While the remake loosely followed the original, it was definitely ripping off a lot of the aspects of Running Man and Gamer just flat out rips it off. Running Man was one of the originals in that "convict competition" films and will always be my favorite.
The plot of Running Man is simple. In the future the world has become a police state. There is an overflow of convicts so the government created game shows that put convicts against each other with the winner being set free and the losers dying. The most popular of these game shows is called Running Man, a gladiator like game where the convicts, or runners, avoid stalkers and certain death. If they survive they go free. Ben Richards is a wrongly convicted convict and when he escapes from a labor camp is soon caught and forced to compete in Running Man.
This should sound familiar. That's because it is. The story, while now done plenty of times, does its job well enough and is quite interesting. The acting is laughably bad for most of the actors with only Arnold giving a truly solid performance. Also Arnold has some pretty badass one liners

Overall Running Man is one of my favorite action movies of all time and a great Arnold classic. Pick this one up.