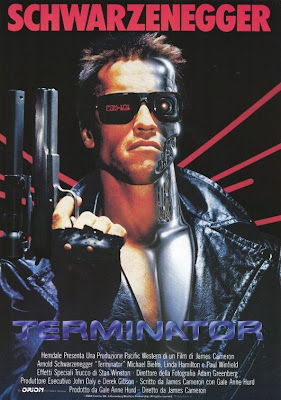 Hello I am the movie encyclopedia and if no one else will see it, I will.
Now its time for my number 1 favorite Arnold Schwarzenegger film of all time-The Terminator. While Conan is the movie that turned Arnold into a star it was The Terminator that turned him into a legend. The Terminator series is the highest point of Arnold's career and people to this day quote him constantly. In fact it wouldn't be much of a stretch to say one of the few things people REMEMBER from these films is Arnold. The Hasta La Vista's the I'll be Back's and all the other great one liners in the movies turned Arnold into a household name, made him even more badass then he already was and even gave him a nickname when he became governor-The Governator.
But James Cameron's first entry into the series, a film series based on a nightmare he had once, is the story of a world 19 years from now. A world where Skynet, a group of robotic creatures have taken over the world and killed off most of humanity. The only opposition and only problems that Skynet have ever had is with a man named John Connor. So to solve that problem Skynet sends one of their Terminator cyborgs (dressed as a human) to kill John Connor's mother Sarah Connor. At the same time the resistance fighters send one of their best Kyle Reese to stop the Terminator and protect Sarah.
That's about as deep as the plot goes and considering this was a completely original idea from Cameron (something he lacked in his latest movie BURN) it is pretty well done. The backstory is well told and explained and actually quite interesting. That and most people love time travel. The meat of the film however is not story but action. This movie is chock full of non stop no holds barred action and its awesome. Yeah there is some action involving Sarah and Kyle that's awesome (towards the end) but most of the great stuff and nearly all of the action comes from the Terminator. He blows holes through people, stabs them, throws them, shoots them, drives cars through buildings, he is RUTHLESS. AWESOME...but RUTHLESS. Add that to one line that will be repeated more than any other line in film history (do I need to say) and you got a great movie.
While this is a great movie it does have slow moments. My only other gripe though is that the sequel was amazing. The third one not so much but the sequel was one of the most badass movies ever. But then why did I choose this one? Its a classic and it MADE Arnold who he is today.
If you haven't seen this movie...do it. There is no reason you shouldn't. Please see this movie. Or I'll be back.
MY VERDICT: OWN IT
Posted by xTJMac510x at 12:59 AM