I thank whatever gods may be / For my unconquerable soul. / I am the master of my fate / I am the captain of my soul. 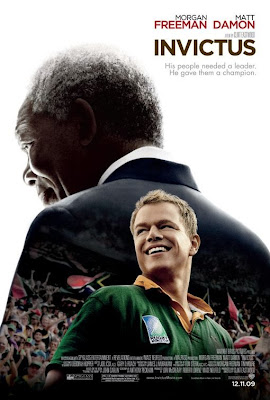 To say Nelson Mandela has been extremly influential to South Africa is an understatement. To go from being a prisoner for twenty something years to becoming president in a country that's power is dominated by whites and you always have a giant target on your back and STILL do a great job with a smile on your face is a feat that I have seen no mere man do before. He is the epitome of forgive and forget and in a risky and controversial decision, he banked his initial success on the South African Springboks winning the Rugby World Cup.

From the beginning Nelson Mandela wanted Morgan Freeman to play himself in the movie. He would do any and everything in his power to make sure that Freeman played him. And for almost ten years a biopic has been in the works covering Mandela and Freeman has always been the first and only choice to play Mandela. But it took now retired actor/director Clint Eastwood, his son Scott and other son Dylan along with Matt Damon and Freeman to create a good biopic. Yeah its not the tell all tale of Mandela's entire life but it does what its supposed to do and more importantly shows you who Nelson Mandela is through his actions and not by his past.

The story takes place between 1990 and 1995. In 1990 Nelson Mandela (Morgan Freeman) was released from prison and in 1994 he was elected president of South Africa. The film quickly jumps from 1990 to his election skipping over that four year period. Why? Its not important why. The film neatly transistions using psuedo news reels to show Mandela's rise to power and his ultimate winning of president. From there it mostly follows what was going on in his life during that period. Where the story picks up however is when Mandela watches the Springboks play Rugby. Led by Francois Pienaar (Matt Damon) the Springboks have not been on the top of their game. But when Mandela realizes that as a great political move that he could use the Springboks to create unity in South Africa, he pulls Pienaar aside and says that he needs to win the 1995 Rugby World Cup.

Seemlessly blending biopic and sports movie this film always feels both and neither. Dylan Eastwood's music composistion is brilliantly crafted and fits every scene perfectly. Clint, who directs and produces it is amazing. He has a true eye for beauty in this film, not only aesthetically but also in the way every shot is done. No one shot seems out of place and they all seem to have meaning. Clint Eastwood is not only a great man and a great actor, but he rivals Scorsese, Kubrick and Welles as one of the best directors ever. If you need any proof than pop this movie in. It shows Eastwood's true brilliance.

I don't even need to mention the acting. Its all brilliant and even Matt Damon is perfectly cast in this role, bringing a true emotion and sense of pride to his character. And I will tell you right now that if Freeman doesn't win or at least get nominated for an Oscar...I will never watch them again. He IS MANDELA. His nuances, his body language, his accent everything. Never in my life have I seen an actor truly embody the true nature of one person like Freeman has in this movie. He is a joy to watch in every scene.

This is a movie you must see. Whether you like or even know who Nelson Mandela is or whether or not you actually enjoy sports influenced movies it is a movie that will truly move you and make you stand up and shout "THIS IS HOW A MOVIE SHOULD BE DONE."

So while not in my top 20...I can't give this anything lower so I introduce a new category: Top Film. It has the same 5 star quality as a Top 20 but not ACTUALLY IN my top 20.