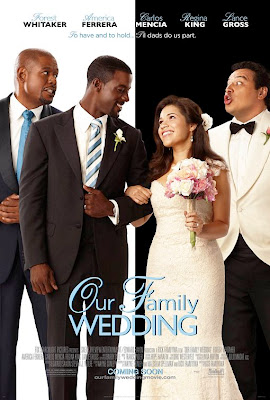 Hello I am the movie encyclopedia and if no one else will see it, I will.
I should have known this was going to be bad. Not terrible because Forrest Whitaker and Regina King would make it watchable at least but as soon as I saw Carlos Mencia in the main titles and learned it was a romantic comedy in some sort of Dad's one uping each other sort of way, I should have ran hard and far far away from this film. But I'm determined that I must be some sort of masochist as I sat through this film and honestly I was right. Watchable, but still painful to sit through.
Here's the idea of the film: Lucia is a law student at Columbia who has just met the man of her dreams Marcus, a Columbia med school graduate. They get together and they fall in love. Lucia drops out of law school to join Marcus in Doctors Without Borders. They won't move to Laos until AFTER they are married however but there are just a few problems:
1. Lucia is Hispanic and Marcus is Black
2. Lucia comes from a very traditional Mexican home and so Lucia must hide the fact that they have been living together (shocker she isn't pregnant...which is a first in these kinds of films).
3. Marcus' dad is a rich DJ whose car gets towed by Lucia's dad.
4. Therefore Marcus' dad and Lucia's dad hate each other...even more so once Lucia and Marcus announced they are engaged
5. Hi jinks ensue...!
This is something you would expect out of a sitcom...not a full length film. There are a few chuckles here and there but for the most part it's pretty painful to sit through. Groan and eye rolling inducing scene after groaning and eye rolling inducing scene.

It also doesn't help that the acting is almost across the board quite lame. Whitaker and King do okay as Marcus' parents but they are overshadowed by the annoying loud mouth Carlos Mencia. He SADLY steals the show and every time he speaks he gets more and more annoying. Add that onto the lazy editing, the lazy directing and the bad writing and it's even worse. 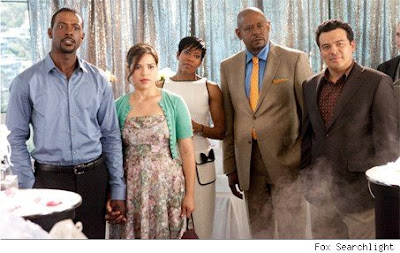 Overall Our Family Wedding is a painfully unfunny sitcom quality romantic comedy. Unless you HAVE to see it, please try to avoid this one.
MY VERDICT: AVOID IT
Posted by xTJMac510x at 1:17 PM