Do you know how you got that dent, in your top lip? Way back, before you were born, I told you a secret, then I put my finger there and I said Shhhhh! 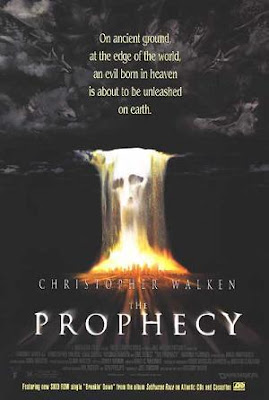 Welcome to the second edition of "Christopher Walken Appreciation Month." In this edition and the next two editions we will be covering a series of films that are loved and hated by many people: The Prophecy series. The first three films are great, mostly because they feature a more kick ass version of Walken, but also because Heaven vs Hell movies tend to be pretty good, or at least they WERE. The Prophecy series is a prime example of how H vs H movies really DO work so without further ado let's take a look into the first one.

The film starts with an image you don't usually see: an angel standing over a skeleton. A voiceover reveals to the audience that another war has broken out in heaven and that the angels are divided now and fighting each other. Thomas, a soon to be ordained priest, sees visions of this and abandons the church to become an LAPD officer having lost his faith after seeing the visions. Thomas arrives home one day to find the angel from the opening, named Simon, sitting in his room. After talking for a bit Simon departs leaving Thomas confused.

The next day Simon gets into a fight with another angel, getting seriously injured, but kills the angel before his heart gets ripped out. Thomas arrives at the crime scene (the angel took human form) and, at the apartment which Simon was staying at, finds a book he was studying at seminary. Simon goes after an evil soul of a man that just died while Thomas goes to the coroners. When there he finds the non-existent 23rd chapter of Revelations and translates it. Soon after Gabriel (Walken) shows up looking for Simon. Basically from there Simon meets a schoolteacher, puts the evil soul in a kid, Thomas and Gabriel chase down Simon, Simon gets killed, Gabriel is evil, Satan shows up, confrontation, Gabriel gets killed and sent to hell, and Thomas regains his faith.

It's a very intricate and intriguing story whether you are someone of faith or not. The acting is great all around, the effects are cool, Walken is badass and it has some truly good scare moments. The writing is pretty good, albeit a bit heavy handed at times but overall pretty good. A decent horror movie if you can get your hands on it.