Don't hassle me about crumbs man, because I am on the edge of the edge. 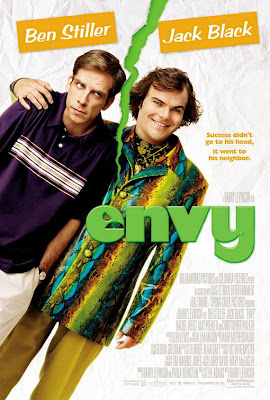 A film that was considered so bad that it was almost sent straight to DVD and then almost cancelled altogether before getting enough backing to send it to theaters briefly. That sentence should almost guarantee this film gets my lowest rating. On top of that both the stars and the director apologized for the film. But while Envy IS a bad film, it does have enough of a redeeming value to make it semi watchable, mostly in part to overly silly sight gags and of course Mr. Chris Walken.

The plot of Envy follows two best friends named Tim and Nick (played by Stiller and Black). They both live semi-normal lives but Nick is always trying to think of get rich quick schemes. One day he invents VaPOOrize and gets rich of it. Tim was given the option of investing in the company but blew it off. Now Tim is pissed and green with envy while Nick is completely blissfully ignorant at how his friend feels. Eventually Tim meets a drifter named J-Man (Walken) who becomes Tim's partner in trying to bring down Nick and become rich themselves. 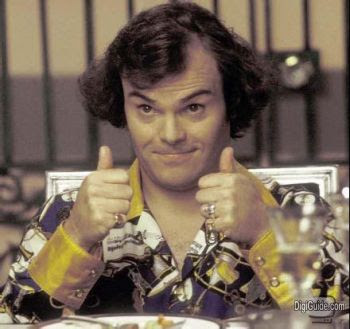 The plot's really not that bad but most to all of the non-Walken jokes really fall on their face. Add that on to lazy direction and poor cinematography and this becomes an ugly film all around. Stiller is his usual spastic self and that gets old quickly and as for Jack Black...well he plays Jack Black. By now you like the man or you hate his guts. I'm in the former so I thought he was pretty good in this. The rest of the cast is okay but forgettable which is sad because Amy Poehler is usually always pretty funny and Rachel Weisz is a good actress. But they get shoved under the bus and carried away once Black and Walken walk in. Walken does great as usual and his wild wig and his mannerisms are great in this film. Overall he makes the film watchable and I found myself skipping to scenes with him in it most of the time.

Overall Envy is a poorly written, directed and shot film with decent but forgettable acting (sans Black and Walken) and overall a pretty disappointing film.