Your door's not thick enough to pretend you're not home when you're home. 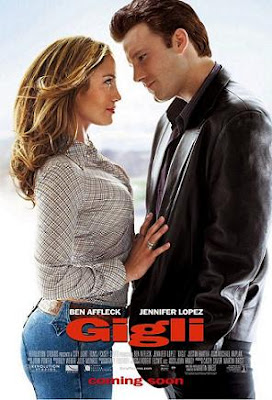 Welcome to the first edition of what I like to call "Christopher Walken Appreciation Month!" This is where I take a look at all of the films (that I own or have seen) that stare the one and only Christopher Walken. In some he has a starring role and in some he is only in for a few minutes. But whether it's three hours or three minutes, all of it is awesome. So without further ado and since it IS April Fool's, let's start with arguably his weakest film (which is saying a lot): Gigli.

Gigli is a horrific film with an even more horrific plot. Larry Gigli is a mobster. But he's not a cool mobster or a mob boss...no instead he is a low level muscle who has been assigned to kidnap the mentally challenged brother of a federal prosecutor. Why? Because the mob boss, who is in jail right now, believes that he can make a deal with the prosecutor if he holds the brother ransom. But Gigli's boss Louis doesn't think that he is up for the task and hires Ricki, a tough lesbian whom Larry falls for. Baywatch, retard, blood, corpse and thumb jokes ensue and that's about it. A dumb comedy with weird partner chemistry, oddly dark jokes and bad pacing.

The one good thing about this movie is this: Walken, a detective, wanting pie and getting in Larry's face.


I just saved you an hour and a half of crap. You are welcome. That being said this scene is awesome and proves that Walken is amazing in every sense of the word. The rest of the acting is stupid and painfully bad.