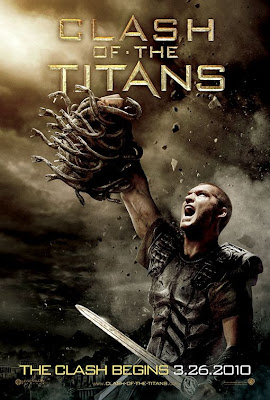 Hello I am the movie encyclopedia and if no one else will see it, I will.
Alright first let me get this out of the way: the reviews for this film are going to be very skewed. I know plenty of my blogging friends hated this film with a passion while only Nick (my podcast partner) is the only one who has given it a good review. I knew it would be skewed when Roger Ebert gave it a good review and Richard Roeper didn't. I think that the main reason why these reviews are SO skewed and so polar opposites comes down to two things:
1. The 3-D: The 3-D effects are horrible. They are too pop out storybook and almost destroy anything good about 3-D that has been done in the past couple months. The reasoning behind this? The creators of the film thought that since 3-D was such a hot subject nowadays and people would pay crazy amounts (I paid 15 for How to Train Your Dragon) to see a film in 3-D so after the film was finished they went back in and ADDED 3-D. Problem was that the film was MADE for 2-D and so the effects look really weird. That and they didn't have a light filter or grain filter added making the film almost totally unwatchable in 3-D. Avoid it in 3-D at all costs.
2. Taking the film too seriously: This should be pretty self explanatory since the film is a remake of a VERY campy and cheesy (I love it though don't get me wrong) 1980s film. That and this film is written by a newbie writer AND the writer and director of the abysmal Dream catcher (although he DID write Empire Strikes Back which saves his credibility) and directed by Louis Leterrier who gives Michael Bay a run for his money in terms of stupid blowing crap up films. So do you REALLY think that THIS film is SUPPOSED to be taken seriously? It's a mindless B-Movie action flick with mythology thrown in.
Now that I have that out of the way let me tell you what I thought:
The story is actually pretty solid for the most part, minus some pretty disappointing moments. One of those disappointments comes in the form of the first 15 minutes. It starts with a brief overview of what has happened up to the point and then shoves baby, kid, family, death, Olympus, Argos, GO! right in your face without any ability to soak in what just happened. The baby scene makes sense as it sets up for the character of Perseus (Sam Worthington) but the kid scene and the fisherman scene DO seem out of place. They DO work but it's not until the statue is tipped and Hades (Ralph Fiennes) shows up killing Perseus' family do you really feel like "Oh this is what those previous 8 minutes were trying to tell us!" That being said I think Pete Postlewaite does a PHENOMENAL job as Perseus' adopted father. He is one of the best character actors out there and as brief as his performance is, he gives some of the best lines in the film.
Soon after his family is killed Perseus is shoved onto another boat headed for Argos and once there he learns that he IS a demigod (the son of Zeus and a woman), Zeus (Liam Neeson playing Santa Christ...I mean shiny Jesus...I mean Zeus) is saddened because he needs the peoples' prayers and love to feed off of but the people are turning away, Hades gets assigned to take them all out with his pet Kraken in ten days if they don't sacrifice the princess and it's up to Perseus to save the day. All that plot is shoved in the first 15 minutes and put with the disjointed beginning it makes it hard to understand. But Io (Gemma Arterton) another demigod comes and reaffirms all this to Perseus and decides to follow them on their journey because she's his guardian (and love interest). 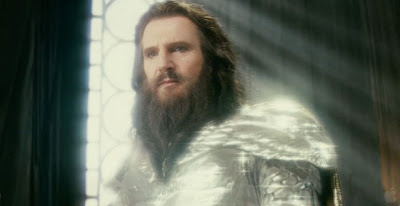 Soon after the group of rag tag misfits and soldiers (comic relief, cynical one, stoic one, newbie) all go rushing to find the witches who can tell Perseus how to kill the Kraken. Zeus actually starts caring about his newfound son and periodically hands him gifts and tools (like a coin, a sword, Pegasus) without anyone or any other god knowing. Eventually though the soldiers and Perseus come across three problems, each which take up a good portion of the film. The first is that of Acrisius, the disfigured king whose wife gave birth to Perseus who, after being shocked by Zeus, calls himself Calibos. Hades gives him superpowers capable of killing Perseus because Hades wants to take out Zeus as well as all the people. So periodically throughout the film Calibos comes and wreaks havoc on our characters. The second is that of giant scorpions of Hades that spawned from Calibos's hand. Those are the main nuiscense and that battle takes up a good portion of the film. The third and final is that of Medusa. Medusa is very cheesy and cheap looking and probably the most unsatisfying...but decapitations are always pretty sweet. Basically from there what you expect happens. The Kraken shows up, acts all badass, Perseus stops it, Zeus helps Kamehameha Hades back to the Underworld with Perseus' sword and the film ends with them flying off in the sunset. 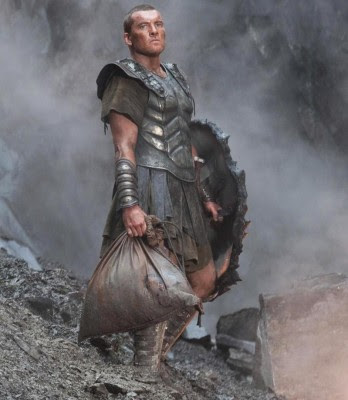 The film is very ADD and takes little time to explain anything besides a few lines. The story however moves at a good pace and there really isn't much to complain about it. It's about as deep as an action plot is SUPPOSED to be. The one thing I will say is there is a LOT of oddly placed humor. It's good but it's a little off putting with the tone of some of the scenes.
The acting is...well it's there. Sam Worthington is a much better Perseus and plays the "pissed off" guy really well. He plays almost a Jason Statham-esque character though and for some that may be bad. What I mean by that is he grits his teeth, mutters a lot, yells a lot and likes to hit things while looking dirty. For an action film that's a good thing...I'm not watching Clash for Shakespeare. Otherwise pretty solid acting although it was REALLY HARD to care about the secondary characters. The effects and scenery, minus Medusa are amazing as well.
Overall Clash of the Titans is a B-Movie action flick with lots of CGI special effects and action. It doesn't take itself TOO seriously (look for Bubo's appearance), it's fun to watch and it's one of the better action movies I have seen in a long time. As long as you avoid the 3-D you will enjoy this movie. That being said I realize I am in the minority but I'm willing to accept that. It's a fun film.
oh and I always think of this when I hear that quote at the top: