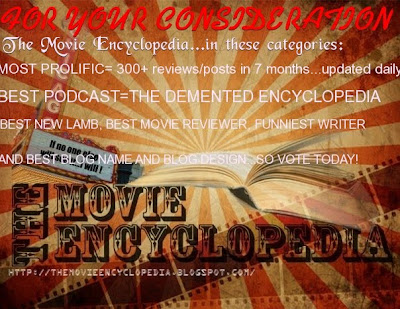 Hello I am the movie encyclopedia and if no one else will see it, I will.
Today the 2010 LAMMY'S were announced. In between Survivor Interviews, Uwe Boll interviews (which will be up by Sunday), Hollywood Hauls (and an upcoming Mall Haul), movie reviews which I'm hard at work on and dealing with college I totally almost forgot about the LAMMYs. The LAMMYs are the equivalent of the Oscars for the LAMBs. It's where we all can gather around and celebrate achievements and acknowledge that people really do care about your work.
I have been excited about the LAMMY's even before I was a LAMB. Once, while visiting my cousin Jimmy's blog (Diary of A Mad Film Fan) I noticed that he had a new sticker thing on his blog that said LAMMY winner. It was because of that award that I first heard about the LAMB's. So it's thanks to the LAMMY's that I am even a member today.
So needless to say I'm excited. So if you haven't already, be sure to send in your nominations today. They last until May 12th and then the nominees are announced. Once they are you get the opportunity to vote for who you think should win and then shortly afterwards the winners are announced.
If you are a member you can send the nominations in as well as a FYC (For Your Consideration) poster so that you can put your hat into the ring for everyone to see. Mine is at the top of the post and should show up on the LAMB sometime.
I'm not saying you have to vote for me or anything like that but every vote for The Movie Encyclopedia is appreciated. I made sure that ALL of my favorite sites and frequent commenter's got a nomination in some form or another (I reciprocate) and hopefully I meet a criteria of voting for you.
Best luck to all and stay tuned for Part 3 of the Hollywood Haul along with more reviews.
Posted by xTJMac510x at 7:47 PM

Email ThisBlogThis!Share to TwitterShare to FacebookShare to Pinterest
Labels: THE LAMMYS