I don't want you to be guilty. So, Mr. Duncan; take a breath, start again, let's have a conversation that makes you not guilty. 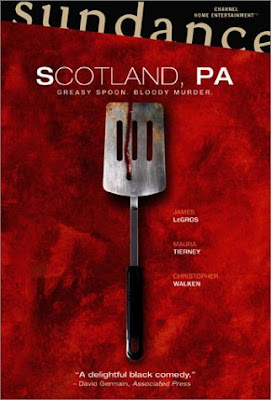 Hello I am the movie encyclopedia and if no one else will see it, I will.
Indie comedies are always an interesting bunch for me. Some can be inventive and hilarious (Shaun of the Dead) and some can be horrible films that actually hurt to watch (Taintlight). The same goes for Shakespeare remakes. Everyone can and has done remakes and to be honest they are hit and miss. Usually it's because they only copy the story and lack originality or they lack star power. Well "Scotland, PA," a modern day remake of Macbeth is the best of both of those worlds. It's a dark, indie comedy and a pretty good retelling of the classic story.
The plot follows the general outline of Macbeth but plays pretty fast and loose with the source material. The idea is that Joe "Mac" Macbeth is a normal fry cook in the 70s. His boss Norm Duncan is a big business mogul who steals all of Mac's ideas and pawns them off on his son Malcolm. When one of Mac's biggest dreams, to create a fast food burger restaurant with a giant M arch (sound familiar?), gets taken, his wife Pat decides that they need to kill Duncan and take over creating the fast food restaurant known as "Macbeth's." But Mac is hesitant and settles for just robbing him. Problem is that Duncan comes in and needless to say he gets fried. Malcolm gives the restaurant over to the Macbeth's and everything seems fine until detective McDuff comes and starts snooping around. 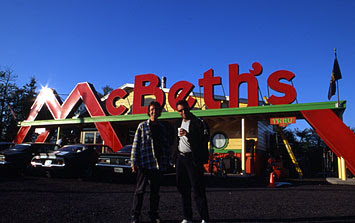 Eat at McBeth's
This film is DARK and extremely quirky. The plot is great and moves along at a breakneck pace. The character development is great and you feel as if the director and writer really cared about the source material enough to respect it but also weren't afraid to change it up. It also helps that it never really feels like an indie film. You know it is since Sundance logos are splashed everywhere but it really feels like a big budget film.
Probably the best part about Scotland, PA though is the acting. Not so much from the guy who played Mac but moreso from everyone else. Maura Tierney is a great Lady Macbeth. She is evil, and devious but also looks very sweet and sexy. She is the perfect, subtle femme fatale. The witches too are a weird but interesting comedy relief with Amy Smart and Andy Dick doing quite well for themselves. But the person who steals the show is Christopher Walken. It's a more subtle Walken then we've seen in the past but all of his lines are gold. But he definitely shines in this film.
Overall Scotland, PA is a good indie dark comedy with great writing, great acting and does well with it's source material. Despite a lackluster Macbeth and some confusing elements this is a movie worth seeing if you can find it.
MY VERDICT: SEE IT
Posted by xTJMac510x at 1:03 PM