What is this? What are you doing to us? 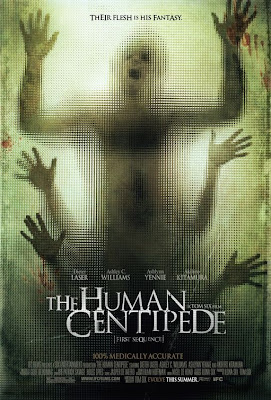 Hello I am the movie encyclopedia and if no one else will see it, I will.
I never have nightmares anymore. The last time I had a nightmare was after watching Antichrist. It's not because the film was scary but mostly because foxes eating themselves saying "Chaos Reigns" and a woman chopping her private parts off with rusty scissors is enough to make me never want to sleep again. And I thought after laughing my way through Seed, Saw and Hostel films that I was totally desensitized to creepy torture porn or weird horror films but I guess I was wrong. Well who do I thank for this. Well I thank the controversial Dutch director known as Tom Six who wrote and directed a little film called "The Human Centipede." Needless to say that film gave ME nightmares.
The plot is as follows: Dr Heiter is an evil mad scientist. He kidnaps a truck driver and we never see him again until later. Meanwhile Lindsay and Jenny are two American tourists whose car breaks down. They end up at Dr. Heiter's house to see if they can find a way to fix their car and when they finally get INSIDE the house...the shit hits the fan. The girls are drugged and forced into a makeshift hospital ward where they wake up and see the truck driver. He is killed for not "being a match" and the girls then wake up again to find a NEW replacement named Katsuro, a Japanese tourist. The Doctor explains that he is a world renowned surgeon known for separating conjoined twins. He has this idea to join three people together through their digestive track, a "human centipede" of sorts, and wants the three captives to be the guniea pigs. 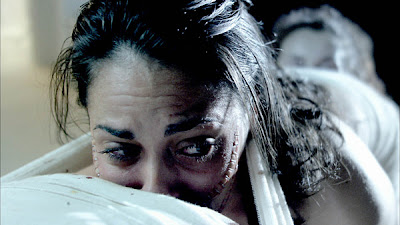 Long story short, they end up joined together, are forced to do tasks, Katsuro gets angry and gets the crap beaten out of him, Lindsay is forced to swallow crap, Jenny's dying of blood poisoning, a couple of police officers show up, they go, Katsuro stabs Heiter, commits suicide, the officers return and Heiter and the officers get shot. Jenny finally dies of her blood poisoning and Ashley is left alone with two dead people attached to her.
This is one MESSED UP MOVIE. It's helped by the fact that it's well acted and written for the most part but it's still messed up. Heiter is a great mad scientist and one of the best villains I've seen in a while. The cops are good and, besides Katsuro, the captives are all pretty good actors. And the plot doesn't really screw around much which is appreciated. Don't worry there won't be any "Wait for 45 minutes before anything happens" going on in this film. Once it gets going...it gets GOING.
The special effects are good and I HAVE to applaud the make up department. The lighting and the cinematography are quite good as well. The film has a very nice atmospheric feel which really adds a good tone to the film. My only huge issue with the movie is I couldn't get this out of my head... 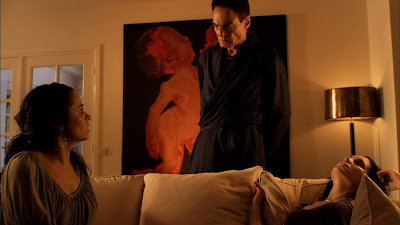 Overall the Human Centipede is a messed up but decent horror film that takes risks and is quite original. It's not for the weak of heart or stomach but there are certainly worse films out there...
so if you're even slightly interested...give this one a look.
MY VERDICT: RENT IT
Posted by xTJMac510x at 11:21 PM

Email ThisBlogThis!Share to TwitterShare to FacebookShare to Pinterest
Labels: Horror, Rent it