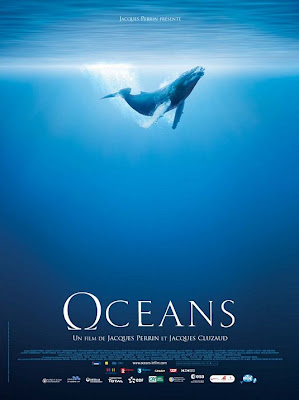 Hello I am the movie encyclopedia and if no one else will see it, I will.
Well Jaques Perrin is up to his old tricks again. The famed nature documenter and director of such awe inspiring films like Winged Migration (despite it being boring as all hell) and many others is back with a new film called Oceans. It took 50,000,000 Euros, four years, and fifty different locations to create this film. Painstaking effort when it comes to the visuals as well as the editing (they had to wait like 20+ hours to get one brief shot) really shows just how beautiful this film really is. Perrin, working alongside many other people including his friend Jaques Cluzard have created a stunning film that Blu-Ray was designed to show. While not in 3-D like the other recent oceanic film, this film makes up for it in just the sheer mass of "What the..." moments you experience. 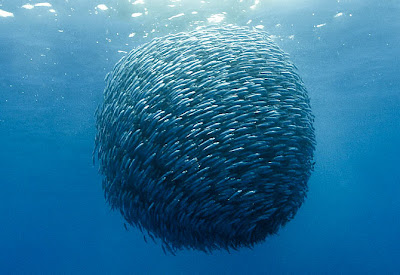 The "story" of Oceans is a simple one. It's the story of the sea. All of the inner workings, all of the different creatures, all of the different interactions that people and other creatures have with it, how big it is, how blue it is, and some of the perils that come with the sea. But it's not just you sitting and watching the sea for 100 minutes. No we are guided along by Pierce Brosnan, who can't seem to pick an accent in the movie but does his damnedest to keep the story going. Brosnan is one of four narrators in the film but the only one that we in America are going to see. Perrin himself narrates the French version with Aldo and Rie Miyazawa doing the Italian and Japanese narration. Why Perrin picked Brosnan is baffling (was Morgan Freeman or Liam Neeson not available?) but that being said he provides a nice calming voice through the film.
The film does have a purpose though besides what I said however and it's both a positive and a negative for me: respecting nature and how we the human race are destroying it. Now I'm all for green, I recycle and I do my part to help mother nature, but at the same time I hate it when films have this preachy message that they try to subliminally shove down your throat. They don't tell you that you a heartless monster, they show you. Al Gore did it with an Incoveniant Truth and I hated that film. I see a lot of nature and political films that tell us how bad we are. I honestly didn't think Disney would. That being said I respect them for trying to get kids to go green but the "Help the environment" ads every 2 minutes on Disney does it's job well enough. But I only REALLY noticed if I looked. Most of the time you are just staring dumbfounded at the screen. 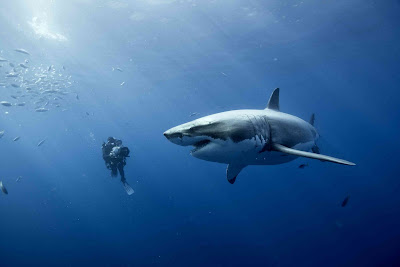 Overall Oceans is a good documentary with stunning visuals. It has a preachy message and is pretty slow at times but it's definitely worth checking out for the visuals alone.
MY VERDICT: SEE IT
Posted by xTJMac510x at 1:41 PM