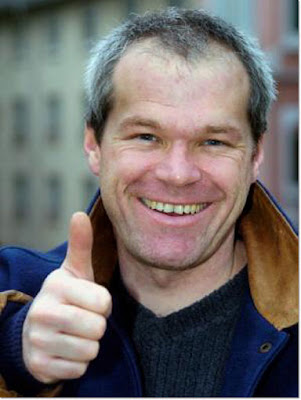 I've always had a soft spot for Uwe Boll. Whether or not he is a good writer/director is an argument I try to stay away from. While he has made some horrifically bad films, like his video game adaptations and Seed, he has also made some really good films as well, like his filmography up to House of the Dead (three German films, a Deliverance esque thriller and a school shooting film) and his recent film Rampage. He's outspoken, ballsy, has surprisingly good taste in films, and if nothing else he can take as much as he can give. Critics all around the world have bashed the man and fans have even put out a petition to get him to stop. He's also been the butt of many jokes, whether a parody video, a comic or a video on That Guy With The Glasses. But through it all he laughs his way to the bank and isn't afraid to poke fun at himself (see his Postal campaign videos).
So what possessed me to interview him? Well I'll tell you. After watching Spoony (aka Noah Antwiler) interview Kristanna Loken, I had a fantasy of what it would be like to interview the good doctor. So I tracked him down and got an interview with him. It wasn't easy but it was definitely worth it.
So without further ado...Dr. Uwe Boll.
The Movie Encyclopedia: My first question is this-What projects are you currently working on at the moment? Any films coming up soon that we should know about?
Uwe Boll: We are in post production of BLOODRAYNE-THE THIRD REICH and AUSCHWITZ. I try in the last few years to make political, personal movies and genre movies. The more personal movies like POSTAL, SEED, 1968-TUNNELRATS, STOIC, RAMPAGE, DARFUR, and now AUSCHWITZ are always also written by me.
RAMPAGE and DARFUR are getting now in theaters in Germany in a mini-release and PHASE 4 in North America will release them also soon.
TME: Second question- A good number of the film's you've released over the years have been adapted from video games. What made you decided to take on this medium. Have you grown up a video game fan wanting to see some of your favorite games on the silver screen or did you just want to take a series that already had a fan base and go from that. Has there been any video games or series you've wanted to or wish to direct?
Uwe Boll: I came by accident into video game based movies. HOUSE OF THE DEAD I got by accident on my desk and I always loved zombie movies so I made the movie. And it is still to this day the most profitable movie I ever did. After this I tried to get movie rights to games I really liked and a few I got. Others like HITMAN or SILENT HILL I did not get. I tried to show with ALONE IN THE DARK, BLOODRAYNE, IN THE NAME OF THE KING aka DUNGEON SIEGE, POSTAL and FAR CRY that video game based movies are not always horror films. I showed the whole range of video games and I think with POSTAL I proved that the most the most controversial comedy can be a video game adaptation.
TME: Third question- What has been your favorite production. I mean I hear the stories of Romania with Bloodrayne (like with the stray dogs and cats) and I hear stories about all the things going on behind the scenes...has there been a film production that has been more memorable than others?
Uwe Boll: My favorite is POSTAL because after I long time I went back to scriptwriting with it and I packed all my dirty humor (even about myself as a lederhosen nazi) in that movie. We were laughing on set and in post production I love the result. I think with the personal movies listed above I made my best movies all in the last few years. It was also great to shoot IN THE NAME OF THE KING because of the size of the production and the work with all the big actors.
TME: Fourth question- What is your favorite movie you have ever worked on? Any actors/actresses you liked collaborating with and/or wish to collaborate with in the future?
Uwe Boll: Very impressive and with impact was the shoot for DARFUR-the movie about the genocide in Sudan. The Sudanese refugees played themselves and were unbelievably strong. The American actors like Kristanna Loken, Billy Zane or Edward Furlong were blown away. It's my most important movie because the genocide is still going on and right now a lot of universities in the USA are showing the movie and I hope it will grow. I like working with Michael Pare, he's my best actor friend after Will Sanderson retired. I also like Loken, Furlong, Clint Howard, and Ron Perlman...all great to work with. I would LOVE to shoot with Bruce Willis, Kurt Russel or Brad Pitt.
Fifth Question-What is your opinion on the petition to get you to retire? I personally think it's dumb because you've gone on record saying that you would never do it even if they got 1,000,000 signatures. But what is your opinion now?

Uwe Boll: The petition is now and old and uninteresting. It got a lot of press and a chewing gum sponsor but oh well...what a bullshit.
Sixth Question- Is there a certain genre you prefer over others? If you could only pick one to do what would it be?
Uwe Boll: I like doing different genres. I would hate it always doing the same movie like George A Romero does.
Seventh Question- What is your favorite film(s) and why?
Uwe Boll: The best movies of all time for my personal tastes are: APOCALYPSE NOW, GODFATHER 1 AND 2, GOODFELLAS, RAGING BULL, TAXI DRIVER, A CLOCKWORK ORANGE, DANCES WITH WOLVES, BIG COUNTRY FROM WILLIAM WYLER, LITTLE FOXES WITH BETTY DAVIS, CITIZEN KANE, THE HOUSE AMBERSON FROM WELLES and many many more films.
Right now my number 1 favorite IS APOCALYPSE NOW because it was a visible adventure to shoot and the crazy production situations made the movie what it was and it really reflects the absurdity of war.
TME: Eighth question-Any advice for aspiring directors or writers?
Uwe Boll: Follow your dreams and work hard to make them come true...or rob a bank.
TME: Anything to keep in mind while making a film?
Uwe Boll: When you make a movie have enough sleep, vitamins, food and stay relaxed. Be aware that the crew is getting tired and the cast also...so you must be disciplined and keep your energy up because it's your baby and not theirs. You must then sit alone in the editing, mixing and screening room so get everything in the can that you can.
TME: And finally...what was up with Raging Boll? Why did you decide then and there to box your critics?
Uwe: The boxing was revenge...I was (and still is) sick and tired of the over the top and unfair reviews I was getting.
So there you have it. My interview with Uwe Boll. Hopefully it was everything you hoped for and more. I got one shot and I did the best I could. He was a really nice guy and I was honored to talk with him...so until next time.
And if you didn't like the interview...Uwe Boll has a message for ya! 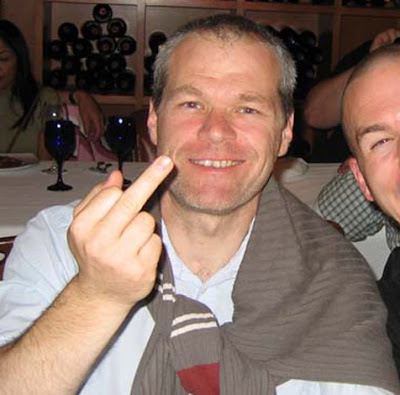 Email ThisBlogThis!Share to TwitterShare to FacebookShare to Pinterest
Labels: other, Uwe Boll