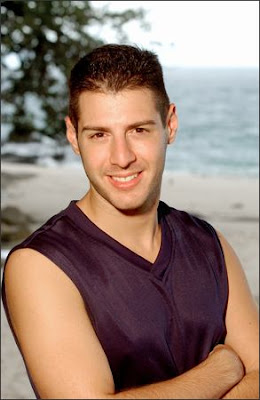 Due to college being college and life being life I haven't had much time to post anything substantial lately but now I'm back and better than ever. And to start it off I am going to give you the interview you have all been waiting for: the Rob interview! Wait...whoops...wrong Rob. You wanted Boston Rob...oh. Well that's coming...Anyway thanks to loopholes, an available spot and my general liking of the guy I was able to score a brief but fun interview with Rob Cesternino, quoted by Jeff to be the best Survivor player to never win...well Russell has taken that spot now but I still think Rob is a close second.
So without further ado...a quick, random chat with Rob Cesternino!
The Movie Encyclopedia: Hey Rob, thanks for taking time out of your busy schedule to talk!
Rob C: No problem, thanks for wanting to interview me.
TME: So what have you been up to since your time on Survivor ended?
Rob C: Well for a while I wrote some stand up material while holding down a job at the Long Island Press. Than when I moved to LA I started up The Fishbowl with a few of my reality show friends (Editor's Note The Fishbowl is an online radio show run by reality alumni). What else? I co-wrote two films and even starred in one and nowadays I am a writer/producer in new forms of media. I work on and develop a number of different web series which has been pretty fun. Oh and I'm getting married (laughs).
TME: So why do you think you weren't on this season? What would you have done if you WOULD have been on?
Rob C: I'd like to think it's because they couldn't decide if I was a hero or a villain and it was too close to call. If I WAS playing...and assuming they would stick me on the villains tribe...I probably would team up with Rob but I don't know if he'd want to team up with me. Ya know the whole awkwardness of our names (laughs). Otherwise I probably would've teamed up with Russell and somehow rounded up Coach, Tyson and the women to create a super alliance. But I wouldn't put it past Russell to try to turn the women and Coach against me so I would be sure to have a separate alliance with Coach, Tyson and the women so that if Russell started talking we could boot him off. But that's just me.
TME: So who ya rooting for right now? Who do you think is playing the best game?
Rob C: I'm definitely rooting for the villains. I like their style of play more than the villains. It's more exciting. The heroes have just been a bust this season. Too egotistical. I personally think the Pavarti/Russell alliance right now is pretty interesting and fun to watch but I think the people playing the best right now are the ones who are under the radar. My thought is that if nobody is talking about you than nobody is voting you out. I think one's to watch out for right now though are actually Candace and Amanda although Sandra and JT have solid chances as well although JT needs to tone it down a little. The thing is the people most FANS think will win have huge targets on them already and could face elimination soon for putting themselves out there too much.
Take Amanda for example. She isn't the most exciting contestant to watch by any means but she actually holds more power than she realizes. I still think that she's gonna screw it up somehow like she has the past two times but people really underestimate her.
TME: A lot of people think Russell is the best player to ever play and there are still a few who believe YOU are. Besides yourself who do you think are the best players to have ever played?
Rob C: Some names that pop in my head immediately are Cirie, Boston Rob and of course Russell. If he wouldn't have had the idols when he did than he would've been gone on Day 18. But he is a very smart player and knows how to play the idols WELL. That's what really sets him apart is that he is very strategic. Even now that people have a grasp of what kind of player he is, nobody can really argue just how good he is at the game.
TME: Ever consider doing Idol again?
Rob C: I think the older I get the more difficult it would be for me to decide but I would probably sit down and discuss it with my fiancee. Never say never.
TME: I gotta ask, do you ever get special bathroom privileges? Like if the cameras aren't on ya then you get to use a port-a-potty or something? It just seems so unsanitary at times!
Rob C: Don't you know? We get a luxurious gold plated bathroom...and Probst is the bathroom attendant! No seriously we are all alone out there. We don't get any luxuries like that.
TME: Thanks again for chatting with me and hope to see ya on Survivor again!
Rob C: Thank you.
Posted by xTJMac510x at 11:00 PM

Email ThisBlogThis!Share to TwitterShare to FacebookShare to Pinterest
Labels: other, Survivor HvV