So...like the angle of the dangle? 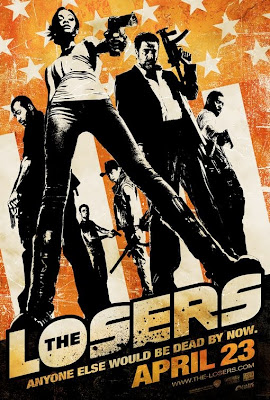 Hello I am the movie encyclopedia and if no one else will see it, I will.
Fast paced, violent, stylistic, hilarious, over the top fun pretty much sums up "The Losers" in one sentence. Directed by Sylvain White, better known as the guy behind the underwhelming Stomp the Yard, and written by Peter Berg (behind films like The Kingdom and The Rundown) and James Vanderbilt (Zodiac), this adaptation of the highly acclaimed Andy Diggle comic book series is as funny as it is action packed. It may not win any awards for writing, acting or directing, but it's loads of fun and a thrill to watch.
The story follows five tough guy soldiers named Clay (Jeffery Dean Morgan), Jensen (Chris Evans), Pooch (Columbus Short), Cougar (Oscar Jaenada) and Roque (Idris Elba) who are sent on a mission to take down a drug lord in Bolivia. When they reach the target area and see that their target is a bus full of kids they decide to abort the mission. A mysterious man named Max (Jason Patric) orders a bomb to be dropped. Taking notice of this, the guys rescue the kids from the bus and put them on a chopper to safety. The problem is that as soon as the helicopter goes up, it gets shot down and all the kids are killed. The guys realize it was meant for them, tear off their dog tags and swear vengeance on Max...even though they are stranded in Bolivia with no money and no passports.

Before I go on you must realize that ALL OF THIS happened BEFORE the title sequence. That's how you start a movie! Anyway the group runs around and Clay gets seduced by a bar girl named Aisha (Zoe Saldana). They go up to a hotel room, fight and then burn said hotel down. After this Clay decides that Aisha should join the team and help them out since she has connections and so the crew get back to America. Pretty much from this point on it's wise crack, EXPLOSION, talking, wise crack EXPLOSION, talking rinse and repeat. It's this over and over for the rest of the film....
...and I am totally fine with that.
That being said the script IS the weakest part of the film. The plot is VERY formulaic and predictable filled with every action cliche in the book. You can predict everything that happens a mile away and that is somewhat disappointing. On top of that the action really does take over the second half of the film so most of the character development, side stories and everything else goes out the window. Added on with that, the character of Max doesn't seem like a really truly evil character, especially since Max is so subdued compared to the over the top characters that are the Losers. It seems like all the work went into the explosions, the Losers and the jokes.But despite that the jokes are quite witty and really hilarious and left me in stitches.
The acting is also brilliant. All the actors shine in their respective roles with nobody slacking off. It's essentially a game of acting one-up for the entire film. But the person who steals the entire movie of course is The Human Torch himself Chris Evans. Evans as Jensen is a wisecracking computer nerd who hits on women, sings in falsetto to Journey (guess the song), fake shoots people (stolen out of Crank but who cares) and is the continuous comedic relief of the film. Everyone, besides maybe Aisha, is actually REALLY funny anyway just with all the snarled and snarky one liners so that's gotta tell you something. On top of that the film is extremely stylistic and bright and flashy. Needless to say you won't get bored with this film.

Citizen Kane the Losers is not. But it's a fun and energetic film that gives you great mindless violence mixed with great acting and humor that's enjoyable from start to finish despite a formulaic and weak plot. If you want funny action and can't wait until the Expendables or the A-Team then give this one a look.
MY VERDICT: SEE IT
Posted by xTJMac510x at 12:29 PM