There's a small step from prophet to martyr. Can you take it? 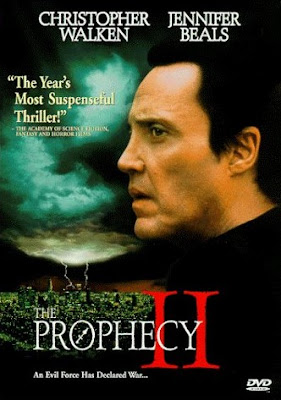 This third edition of Christopher Walken month brings to you the sequel to the Prophecy (known as God's Army) known simply as The Prophecy II. Bringing back Walken as Gabriel in a larger role, featuring a young Britney Murphy and appearances from Russell Wong, Jennifer Beals and Eric Roberts the Prophecy II proves to be a worthy sequel to a good horror film.

The story this time around is Gabriel is back and he isn't happy. He has returned from Hell (he was killed in the first movie) and is determined to find a Nephilim "monkey" (the offspring of an angel and a human) who is destined to precede reconciliation between the two angel factions that are going at it. Thomas, from the first movie, now a monk delivers this news and Gabriel makes damn sure to try to stop it. Danyael is the angel who seduced and impregnated the woman (whose name would turn out to be Valerie) who would give birth to the Nephilim. Soon after Gabriel kills Thomas for not helping him and after things don't go well for his army he instead does this:


Gabriel takes this girl, Izzy, who just committed suicide and recruits her to help him to find the girl since Gabriel can't work any technology. Here's a prime example:


Eventually the movie climaxes in a battle at Eden (yes THAT Eden) and Gabriel kills Danyael. Valerie, in a desperation move, grabs Gabriel and throws herself off a building which only ends up impaling Gabriel on a spike. The angel Michael turns him human and the movie ends with the war culminating for an exciting battle.

I actually almost PREFERRED this film because while it has it's semi scary moments, it really showcases Walken's dry wit and humor about everything and he has SO many great lines in the film. The rest of the acting is sharp and the writing is really good, considering this IS the middle part.