What part of "sudden death" didn't you understand? 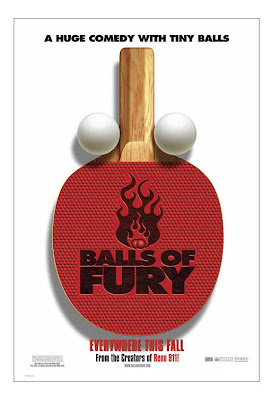 I'm actually a huge fan of Reno 911. The show is hilarious, the characters are memorable and my two favorite characters are Dangle and Junior. So why is it that a movie, directed and written by Dangle and Junior (Ben Garant and Tom Lennon) sucks so hard? Now I'm not saying it's the worst movie ever, I've seen plenty worse, but this movie is a prime example of when comedy doesn't work. It does have a saving grace *cough who do you think?* but overall it's just not a good film.

Dan Fogler plays Randy Daytona, an Olympic table tennis player. After losing at the 98 Olympics, being publicly humiliated and his father killed by the Triad, Randy goes into hiding. 19 years later Randy is working at a casino doing table tennis routines. After being kicked out he is wrangled in by the FBI to take down Feng (Walken), a notorious criminal. He's trained by a blind man named Wong and eventually he finds himself in a tournament in which the winner takes on Feng to the death.


It has its moments of funny but Balls of Fury in the long run just isn't that funny. Without Walken's hilarious portrayal of Feng, which is probably the saving grace, this film would have been unbearable to sit through. Luckily there is enough Feng to make it bearable. Overall though the acting, sans Walken, is terrible, the writing is terrible, the directing is terrible and the plot is unoriginal and boring.

I wanted this movie to be better but in the long run it just wasn't. A sad role for Walken.


MY VERDICT: ABOMINATION TO CINEMA