"We all have our crazy sexual fantasies. Like mine is Cyndi Lauper." "Present Day?" "Any time of day is fine with me." 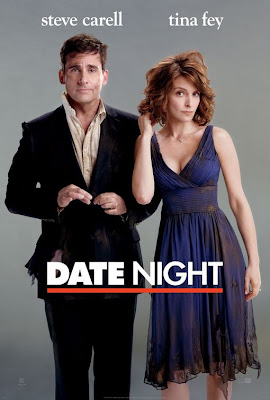 Hello I am the movie encyclopedia and if no one else will see it, I will.
In my honest opinion I think that Tina Fey and Steve Carell are two of the funniest comedians out there right now. The Office, while struggling now in it's later seasons, was a hilarious show. Most of that thanks, in my opinion, was due to Michael Scott who is played by Steve Carell. Tina Fey has been a staple of SNL for years now and as a writer she still pumps out great material not only for SNL but for the show she created that you may have heard of known as 30 Rock. 30 Rock is one of the funniest shows on TV. So in theory a movie starring both of them SHOULD be great right? Well time and time again whenever I see two comedians paired up like this I get worried. The should question always gets asked and rarely do I find myself saying...well it DID work. Well ladies and gentlemen I can tell you that this not only works, it operates perfectly.
The story of Date Night is simply complicated. Claire and Phil Foster are a married couple. They both work hard, have two young kids, and really aren't anything special. They aren't abnormal, they don't have any defects, they aren't gorgeous, and they aren't Mr. and Mrs. Smith. No they are just a New Jersey couple. One of the things they like to do every week though is have date night. On that date night they go out to the same restaurant, order the same dish and make fun of the couples sitting around them (hilarious stuff). But when one of their couple friends decides to get a divorce after being stuck in a rut, Claire and Phil decide to spice it up and eat out in New York City. 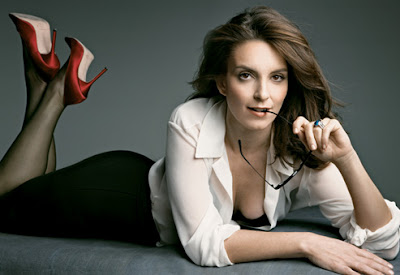 I would totally take that out...what I think Tina Fey is hot...sue me

When they arrive in New York however they find that the restaurant they want to go to is booked and that they have no chance at getting in. So they take someone else's reservation and from there the plot get's interesting. Phil and Claire get mistaken for a couple of crooks and get threatened at gunpoint if they don't give a USB drive...which they don't have. They escape to the police only to find out the guys who just pointed guns at them are cops. So Phil and Claire go to the only person they can trust, Holbrooke Grant (Mark Walhberg), to try and find the REAL couple so they can end their date night on a good note.
The writing is sharp and witty in this film. Before Date Night I had never spit take during a film. A few of the lines, which are perfectly delivered by Fey and Carell, changed that. The humor is genuine, it doesn't rely on fart jokes, it teeters on raunchy without ever getting there (in a good way), and Carell and Fey are believable. You can actually believe that they are really a couple. So their lines seem really believable, which makes it all the more funnier when they say crazy things. My only complaint is it's slightly predictable and the car chase goes on WAY too long.
The acting is great although it is kind of a flaw as well. Fey and Carell are perfect and do great. Common and Jimmi Simpson make good antagonists as the crooked detectives and Mark Wahlberg does a great job as Holbrooke. But besides these I just mentioned, all the other actors seem like cameos. You have actors like Kristin Wiig, Mark Ruffalo, James Franco, Mila Kunis, Taraji P. Henson, Olivia Munn, Ray Liotta and Leighton Meester. All of these people are great in their own right but here they seem underused and under appreciated. Ray Liotta is in the movie for about 10 minutes, which is the same for Henson, Franco and Kunis. The rest of them are in it for maybe 5 at the most. It disappoints me when actors are reduced to "Hey it's so and so...oh and they're gone." But suprisingly Mark Wahlberg is great...and for all the female readers...he never puts on a shirt...ever. 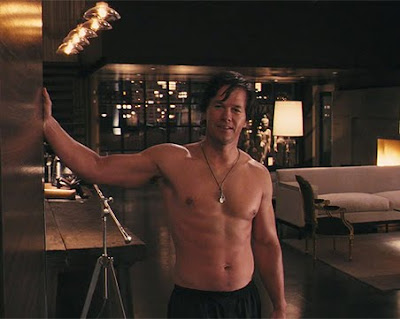 Get used to seeing this image... a lot

Overall Date Night is a well acted, well written comedy that is on par with some of the other great comedies this year. Hitches like overly long scenes or predictability, along with misused cameos keep it from being PERFECT, but you would be a fool not to see this great comedy.
MY VERDICT: OWN IT
Posted by xTJMac510x at 12:06 AM