Does this tutu make my butt look big? 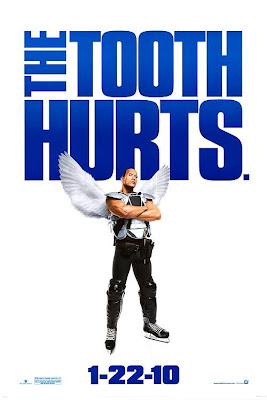 Hello I am the movie encyclopedia and if no one else will see it, I will.
This is the kind of movie I wish I could unsee. I knew it would be a bad movie, the first time I saw the previews I was turned off just like that but for some strange reason I must love torturing myself because I went and saw this God awful film. Why? I don't know I had a free ticket and I was bored I guess is the best answer I could get. I was the only one there and so I thought I could just riff on it...but even with me mocking it almost the entire time it's so mind numbingly stupid that I wish I could get that hour and a half of my life back.
If you must know the story of The Tooth Fairy is that of a hockey player named Derek Thompson. He is pompous, arrogant and thinks he's all that even though he is just a MINOR league player. His nickname is the tooth fairy because he knocks out people's teeth during games. He doesn't believe in fairy tales and even steals the tooth money from his girlfriend's daughter....what a douchebag (and he is our hero ladies and gentlemen). Shortly after committing this act of extreme douchebaggery he is summoned by the realm of tooth fairies and sentenced to be a tooth fairy for two weeks. He thinks it's a dream, it's not yadda yadda yadda his heart grows three times it's size you get the picture.
It's unfunny, lacks any humor even FOR kids, is almost too brutally violent for kids, has horrible special effects and if it wasn't for Julie Andrews or the always funny Billy Crystal I probably would have left the theater it was that bad. Andrews and Crystal ARE pretty good but that screen waste Dwayne Johnson is terrible to not only watch but listen to. I swear he is trying to kill his career as slowly as possible and he's bringing us all down with him.
So even if you have small kids or you have no kids at all just please avoid this movie. It's a painful film to watch and you'll do good to stay away from it.
MY VERDICT: ABOMINATION TO CINEMA
Posted by xTJMac510x at 5:04 PM

Email ThisBlogThis!Share to TwitterShare to FacebookShare to Pinterest
Labels: Abomination to cinema, kids