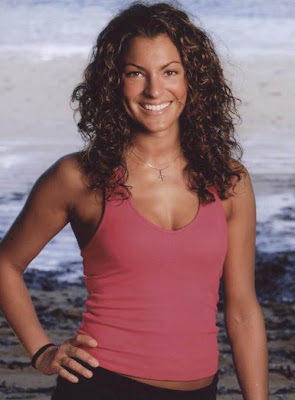 Stephenie: Probably Parvarti. She's definitely a player and sneaky as well. I think she'll go far.
TME: Just wondering do you talk with anyone from previous seasons:
Stephenie: Yeah I do. Mostly people from Palau but in particular I do still keep in touch with Jenna, Ethan, and Heidi mostly.
TME: Final Question: Any advice for people wanting to do Survivor in the future?
Stephenie: I think it's hard to get accepted in the first place but it's easy if you are interesting. Give a good story, do something funny or out there but still be yourself. That's important if you do make it into the game as well. Be honest with yourself. Try your hardest out there, be strategic, always stay on your toes and make friends. If you do these things then you will make it in Survivor.
TME: Thanks for sitting down and talking with me!

Stephenie: No problem I was glad to do this interview. Bye.
Well that'll do it for this interview but be sure to check back next week for another interview with the latest Survivor cast off. And be sure also to catch Dylan Field's Survivor Live Recap for all the up to date information on what's going on during the episode. Check it out at http://blogcabins.blogspot.com/
Posted by xTJMac510x at 1:12 PM

Email ThisBlogThis!Share to TwitterShare to FacebookShare to Pinterest
Labels: interview, other, Survivor HvV