A lot can happen in twelve months John 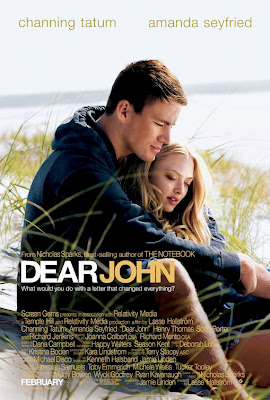 Hello I am the movie encyclopedia and if no one else will see it, I will.
Nicholas Sparks has pretty much reinvented the term tearjerker. He's also wrote books that not only appeal to a large female crowd but also a large male crowd as well. And his books continue to bring joy to millions everywhere. In recent years as well his books have translated into numerous amounts of films. Each is a tearjerker and each makes us feel warm and fuzzy on the inside...usually. His most successful book film to this day is still "The Notebook" which viewers of all ages, races and genders seem to love. Even the toughest of guys love "The Notebook" if nothing else because it's a well told story and a love story that really speaks to us. Trying to recapture that gold, or at least give us something before his Miley Cyrus probably going to be a hit The Last Song, Sparks' latest hit "Dear John" has been brought to the silver screen. With the help of "Chocolat" director Lasse Hallistrom, Sparks has made a film that has already seemed to garner a lot of attention, even if it's not the best of film.
Dear John, the book and movie, is the story of John, a US soldier who on shore leave in 2001 meets Savannah Curtis, a college student on Spring Break. Savannah and John soon fall in love and soon meet each other's family. Savannah has a good family but John's family is a little less than stellar. After a misunderstanding between Savannah and John, John writes Savannah a letter and they make up. John returns to active duty and soon they begin sending letters back and forth to each other, trying to keep the relationship alive.
It's actually not that bad of a story. A little hammy, heavy handed and hokey at times but still quite well written and well told. The directing and cinematography is actually quite lacking in this film but the score and the story seem to make up for it. Amanda Seyfried does a great job as Savannah and Channing Tatum, despite his recent hiccups with GI Joe and other films, does a pretty good job in this film and gives what's probably HIS best performance (not saying much but still). I will say the one bad thing about the story is that it follows the basic rules of a tearjerker and doesn't really deter from that framework at any time. It's sad because the book, in my opinion, deterred from that formula.
I could sit here and say I hated it but I didn't. Yes it's a hammy romantic tearjerker like all of Nicholas Sparks' work but at the same time it's interesting enough, well written enough and well acted enough to at least warrant a rental.
MY VERDICT: RENT IT
Posted by xTJMac510x at 4:13 PM