Sometimes, fate just... fate just up-and-f***s you for no good reason. That the way'a the world! The way it's always gonna be. Alright then, peace bro 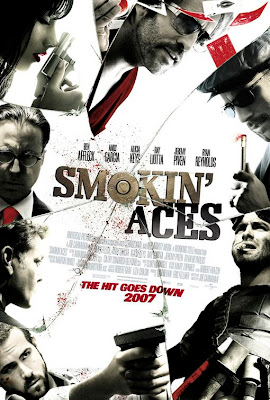 Hello I am the movie encyclopedia and if no one else will see it, I will.
I love Smokin Aces. I am one of the few I know but I really do. No matter how much I try to hate it, this over the top action film is brilliant. It's profanity ridden dialogue hides some truly brilliant plot twists and turns and the characters are fully developed into living, breathing characters that you really care about. Even though all of them (for the most part) are dirt bag assholes it's hard not to enjoy some of the witty banter they have back and forth with each other and when and if they kill off a character it's really hard to watch. No one actor doesn't do their job right with everyone shining and really standing out as being top notch. Just everything about this film is great.
But I'm getting ahead of myself. Smokin Aces is directed by Joe Carnahan who is mostly famous for the film Narc but I've loved him ever since Blood, Guts, Bullets and Octane. He is also slated to direct the A-Team movie as well. Well Carnahan writes and directs this film that I really need to separate for it to make any sense:
-Buddy "Aces" Israel is a magician is Vegas and also an FBI informant for the mob
-Primo Sparazza is the mob boss who is slowly dying of heart disease and wants Aces dead.
-The FBI are sent to protect Israel but are really getting sick of his crap
-A shitload of assassins are hired to take Israel out including:
-They all go to the hotel to fight
-BOOOOOOOOOOOOOMMMMMMMMM!!!!!!!!!!!!!! BANG BANG EXPLETIVE BANG BANG!!
And about an hour and 50 minutes later it's over.
It's so over the top it's great. It's a refreshing guilty pleasure of a film and while most would disagree I've watched this film at least ten times and it's still awesome. So give this one a look and you won't be sorry.
MY VERDICT: TOP FILM
Posted by xTJMac510x at 2:00 PM