No, he can't see us. But trust me, he can feel us watching. 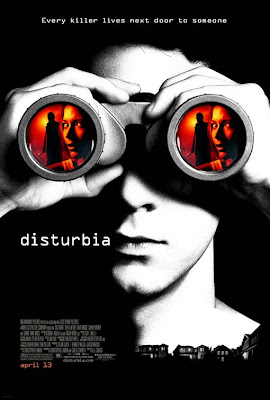 Hello I am the movie encyclopedia and if no one else will see it, I will.
Rear Window was and is one of the best thrillers of all time and probably one of Hitchcock's best films. It's brilliantly written, tense, a modern marvel of movie technology (wikipedia it and you'll see what I mean), extremely well acted (Jimmy Stewart for life) and is one of the best films ever. Disturbia, a remake of Rear Window featuring Shia LaBeouf is nowhere close to that. But it's not a total piece of crap either, just a disappointing thriller with some good scares but overall lacking the punch and the testicular fortitude of the original film it's based off of.
The story of Disturbia is kind of like Rear Window in the way that it's the same idea and same premise but different means to the end. In other words while in Rear Window Jimmy Stewart broke his leg and was doing something to keep busy, in Disturbia Kale is under house arrest for punching out his Spanish teacher after he made a crack about his dead dad and his Xbox live was shut off...same difference right? No not really. Honestly they could have just gone with the original idea (I mean people still break their legs) but NOOO they had to give a "re imagined" look at Rear Window. But basically from there the plot is the same. Kale, in this case, goes in his dead dad's room, finds his binoculars and finds out that his neighbor is a murdering psycho...and he can't prove that.
The story isn't bad but horribly unoriginal, horribly told and all the jokes are juvenile and for about 30-35 minutes the movie is painstakingly boring. It doesn't help that Shia LaBeouf is the best actor in the whole thing. He gives his usual "I'm tough but totally just still a complete nerd with a hard on for anything with a skirt" and everyone else is full frontal lobotomy dumb. Even the villain is boring and dumb. "Look I can steal keys *ghost noises*." Yeah he's pathetic.
Overall though the movie isn't horrible just boring, poorly written and acted and a shameful excuse for a Rear Window remake. Kids just go watch the original.
MY VERDICT: AVOID IT
Posted by xTJMac510x at 1:40 PM

Email ThisBlogThis!Share to TwitterShare to FacebookShare to Pinterest
Labels: Avoid it, thriller