Now tell me that wasn't some impressive shit! 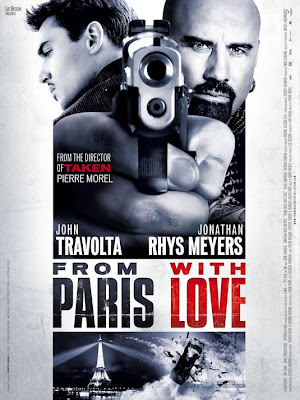 Hello I am the movie encyclopedia and if no one else will see it, I will.
The term guilty pleasure seems to get thrown around a lot but when you think about it what is a guilty pleasure? If you look it up in the dictionary you will see a picture of John Travolta's character Charlie Wax from "From Paris with Love." Directed by Pierre Morel, the famous French director of District 13 and Taken, FPWL shows that even the dumbest most unoriginal plots can be made awesome with a quotable badass character and a lot of over the top action.
The plot is something we have all heard numerous times: Reese (Johnathan Rhys Myers) is a government operative whose job is mostly to plant bugs and switch license plates. He has a wonderful girlfriend Caroline who he lives with and overall a pretty good life. But Reese wants more. After getting engaged to Caroline he gets the assignment he always wanted: a special ops mission. His assignment? To drive around a foul mouthed mentally unstable American hitman named Charlie Wax (John Travolta). Wax is a total loose cannon who doesn't take any prisoners whatsoever while Reese is stuck cleaning up after his mess...and carrying his vase full of cocaine...But when things turn into a potential terrorist attack it's up to Reese and Wax to save the day.
From his first line Travolta owns the screen. Sporting earrings, a shaved head, a dyed goatee, a leather jacket and combat boots Travolta's Wax is a joy to watch. Every line gets funnier and funnier and he never stops. In between kicking ass he tries to "train" Reese to become a better agent and some of his "lessons" are hilarious to listen to. Lines like "When I tell you to shoot the f***er you shoot the f***er!" He even goes so far as to describe what MotherFu**er means! He is rude, crude, obscene and brilliant. Whether you like Travolta or not he is brilliant.

Which is interesting because the rest of the actors suck. Rhys Meyers is totally boring to watch and honestly the first ten minutes are a chore to sit through with one funny moment that I won't spoil. Kasia Smutniak who plays Caroline is monotone and boring and Richard Durden is boring as well. Until Travolta shows up the movie isn't that good. But once Travolta gets things started it's amazing. The action scenes are brilliant and well done and are so over the top that it's hard not to laugh at it's awesomeness.
Overall it's cheesy, over the top, poorly acted (besides Travolta) and predictable but at the end of the day it's a guilty pleasure that is a joy to watch and a great film to relieve stress with because you will be laughing and cheering the whole time. Give this film a shot.
MY VERDICT: OWN IT
Posted by xTJMac510x at 9:28 PM