Escort, hooker, prostitute, whore. I don't mind what you call me that's all just semantics. 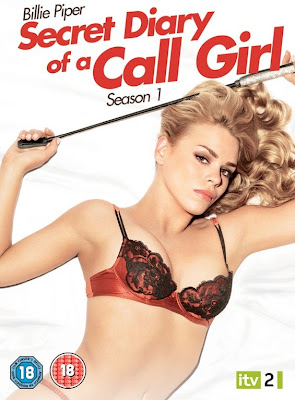 Hello I am the movie encyclopedia and if no one else will see it, I will.
As an avid fan of Doctor Who I have been following the career of Billie Piper for a while. As most Who fans know she plays the iconic character of Rose and while that character is awesome, it WAS more of a supporting role when you think about it. But I guess the TV executive gods were listening because in late 2007 a new show appeared on itv2 called Secret Diary. Soon enough however Showtime, home to so many great shows, picked it up and renamed it Secret Diary of a Call Girl. And being a huge fan of Piper as I am I gave this show a look and I was NOT disappointed.
Call Girl is the story of a girl named Hannah. She is fresh out of university and looking for a job. Problem is she isn't very good at proper jobs so one day, after a fateful encounter with a man, she decides to become a high class escort named Belle de Jour. The interesting thing about this show is that it's actually based on a book with the same title but the kicker is that the events and stories actually really happened and are based on the real life stories of Brooke Magnanti who once was a call girl known as Belle de Jour.
If you go into this show thinking it's sex 24/7 nonstop with some dialogue in between then you're wrong. While sex plays an important part in this show it's more about the adventures of Belle/Hannah than anything else. In fact for most of the show it takes a humorous approach to sex and keeps things usually pretty light.
My main gripe with this great show however is that each episode is 23 minutes long with 2 of it being previously on. So I'm a guy who likes good quality episodes and while most of the episodes are interesting there are a few filler episodes and some of the good episodes have some really slow moments. It feels sometimes like they are wasting time at our expense. That and the first season is about 2 hours long altogether. Otherwise the writing is usually pretty sharp and witty and the acting is good all around although Piper is above and beyond better than anybody else on the show.
Call Girl is a show that grows on you and while season 1 has some bumps, season two and three only get better. This one's worth giving a look at.
MY VERDICT: DvR
Posted by xTJMac510x at 5:30 PM

Email ThisBlogThis!Share to TwitterShare to FacebookShare to Pinterest
Labels: DvR, Secret Diary of a Call Girl