The spirits tell me your little pants are on fire. 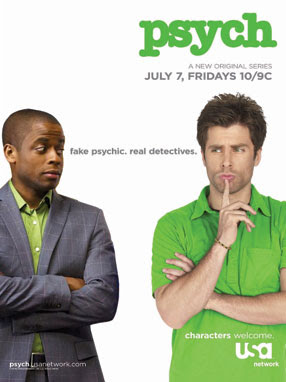 Hello I am the movie encyclopedia and if no one else will see it, I will.
When Psych first debuted I was pretty excited. The writing was fresh, the dialogue was witty and the acting was great. Plus seeing a guy pretend to be psychic and fool everyone into believing he IS one is pretty awesome. From the pilot I was hooked and needless to say I still enjoy this show to this day. But I'm getting ahead of myself. Let's now take a look at the beginning of what would become one of my favorite shows: the first season of Psych.
Psych is the story of Shawn Spencer. Shawn is a free spirited, womanizing, motorcycle riding, cynical, sarcastic son of a decorated police officer. Shawn loves get rich quick schemes but has always had one major hidden talent: his ability to notice things others can't. His powers of deduction along with his steel trap of a memory make him a great detective, even if he doesn't realize it. One day he gets interested in a police case and gets involved a LITTLE too much. One of the head detectives once him thrown in jail but in a last ditch effort Shawn says he is psychic and proves it him by telling the detective all about him. Shawn his noticing powers and impresses the police station. Shawn then grabs his best friend Gus, a medical sales rep and overall smart guy, and starts Psych, a psychic detective company that works with the police.
Every episode follows the same usual pattern. Someone is killed or goes missing and using sleuthing techniques, stealth, disguises and noticing powers, Shawn and Gus figure out who was killed or where the missing person was. The catch is he doesn't tell anyone and has a psychic "vision" that tells the police the answer. These are usually quite dramatic and elaborate and usually always catch the criminal.
The first season does have it's hitches that most rookie shows face, forgettable episodes, plot lines to nowhere and some character development episodes, but when Psych is good....it's really good. The first season shows how great the show will become and it certainly does not disappoint.
MY VERDICT: SEASON PASS
Posted by xTJMac510x at 11:45 PM