You'd let both of us die just to keep your secret? 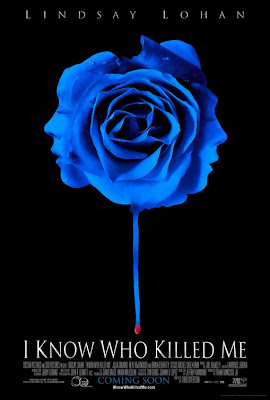 Hello I am the movie encyclopedia and if no one else will see it, I will.
You've heard about this movie, we've all heard about this movie...but have you seen it? I'm willing to bet not a whole lot of you did and for good reason. This multi Razzie award winner is one of the crowning achievements in suckitude in the past decade. This film further cements the fact that Lindsay Lohan is a terrible actress and unless her role is to be slutty, sleep with anything and anyone, smoke like a chimney or go on a drug binge that she is pretty much useless as an actress. It's too bad because when she was younger she had a lot of potential. But like Tom Sizemore she is just a slippery slope that is falling to oblivion.
The plot of I Know Who Killed Me is convoluted, more confusing then Lost and is boring to boot. In a small town there is a serial killer running rampant and kidnapping and torturing women. Aubrey, a writer and piano player is the latest one to go missing. One day a lady finds a girl that looks just like her and brings her to the hospital. Aubrey's parents are there and are happy to have their little girl back only to realize that who they think is Aubrey is really a stripper named Dakota who is a bit down on her luck after suffering some pretty bad wounds. It's now up to her to find Aubrey, this girl who looks just like her, and find out what happened to her.
It could have been an interesting story. The plot when taken out of the context of the movie is actually pretty decent. But the writing and acting completely destroy any hope this film had of being good. Every performance is shallow, hollow, forgettable, boring and uninteresting and all the dialogue is bash your head against the wall stupid and hard to follow. Lohan does nothing for this movie and ultimately this film is a total waste of time.
If you must see it, see it just to witness how horrible a movie truly can be. Otherwise stay away from this one and let it disapear into nothingness.
MY VERDICT: ABOMINATION TO CINEMA

Email ThisBlogThis!Share to TwitterShare to FacebookShare to Pinterest
Labels: Abomination to cinema, thriller