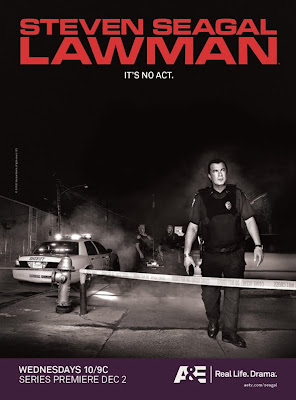 Hello I am the movie encyclopedia and if no one else will see it, I will.
Ya know what I actually like Steven Seagal. Granted he isn't the best actor in the world and he basically plays the same character in every single movie he does but there is something refreshing almost about his sameness. It's like if you go to the video store and find a Seagal movie you know what you're going to expect: lightning fast martial arts fight scenes that are really over the top mixed with explosions and poor writing. That and I respect Seagal's ability to just not give a crap about what critics think and poke fun at himself when and if the time comes.
Another thing I respect about him is that he really is a jack of all trades. He's a writer, an actor, a black belt, a sensei, a producer, a director, a DAMN GOOD blues singer, a master guitar player, a philanthropist for countries in need and in his spare time a reserve Deputy Sheriff for Jefferson Parish Louisiana. For those of you who don't know Jefferson Parish is one of the WORST and crime ridden places in Louisiana. Most cops would dread having to work there and here comes Steven Seagal who works as a sheriff...for free. That's guts and that's ballsy. Then the show got announced. When I first heard about the show I laughed and wrote it off as a fake Cops ripoff. But when you actually sit down to watch the show it's pretty good.
SS:L brings a fresh new approach to the reality police officer show. Instead of just going from crime to crime for a half an hour instead they break it up into different themes for the episode. Sometimes the theme will be fixing the drug problems or educating the youth or training animals or firearms test ect. It's nice to see the show break up into these different themes to space out the crimes and also to show a different aspect of cops that we may not see on a regular basis.
One thing that happens usually whenever there is a crime is what I like to call "Seagal-vision" It's when the camera zooms in on a person and shows what happens in slow motion with a heart beat sound effect. This is usually preceded by Seagal looking inquisitively at something or someone. It's kind of a cool effect and it really does show how some cops have a sixth sense about crimes that may or may not be committed.
My only major gripe with the show is that most of the crimes are kind of over too soon or they let them get away too often. There really aren't that many chase scenes unless for a brief moment before capture. Also they let people go a little too often so you don't hear the lecture in the police cruiser you usually see with Cops. The only other problem I have is Seagal's incessant need to say "From my years of training in the martial arts" or "my training in the martial arts." I swear it should be a drinking game.
Overall SS:L is a pretty good cop show that is entertaining and fun to watch. It does have it's flaws and the season did end a little too soon for my taste (and I don't know if it's returning) but I looked forward to watching it every Wednesday and with the first season to be released on DVD soon I reccomend you at least give this one a look.
MY VERDICT: DvR
Posted by xTJMac510x at 11:52 PM