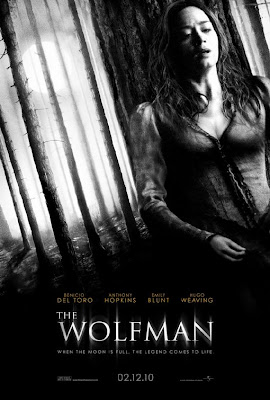 Hello I am the movie encyclopedia and if no one else will see it, I will.
Thanks to Tom Clift, Roger Ebert and the great people at Rotten Tomatoes my expectations for this movie went from really high to rock bottom. I'm glad that happened because it braced me for the impact that was this film. Not in recent years have I seen a horror film SO predictable, SO cheesy, SO badly acted (except for one actor) and SO visually boring that I was in pain watching this movie and nearly pushing my mom out the door to get out of the theater.
The story of the Wolfman, if you haven't already heard it a thousand times before with little tweaks, is about Lawrence (Benicio Del Toro), an actor living in New York who is summoned to a small town near London by his sister in law Gwen (Emily Blunt) to solve the disappearance of his brother who recently went missing. When he arrives his father (Anthony Hopkins) is pleased to see him but warns him of what happened to Ben. Ben is later found dead and Lawrence takes it upon himself to find who now murdered his brother. Well Lawrence goes to the forest, gets bitten by a creature, becomes a werewolf and the rest is what you expect to see in these kinds of films. The plot, for the most part, is as predictable as a Friday the 13th film, with me actually being able to predict every jump scare (the ONLY scares in this movie) and almost all the lines, because you can predict those from a mile away.
The ONLY good part in this ENTIRE film is the character of Francis Aberline played by the remarkable Hugo Weaving. For those who don't know Weaving is the man responsible for such great characters as Agent Smith in "The Matrix" series, V in "V for Vendetta", Megatron in the reboot of "Transformers" and Elrond from "The Lord of the Rings." His dry sense of humor, animated delivery of lines and his ability to make any movie watchable has made him (and only LAMBcasters will get this) MY Ben Foster. Anyway...Aberline is a detective from Scotland Yard who recently dealt with the Jack the Ripper case and has now been sent to investigate the deaths and disappearances of the townsfolk caused by Lawrence.
Del Toro gives Tommy Wiseau a run for his money by giving one of the worst delivery of lines in the history of film. He starts off a whispering, timid mouse, goes Shatner, goes Slater, and then finally goes Wiseau and beyond. By the end of it every time he opens his mouth you laugh. Hopkins, who is usually really good, gives a very monotone performance with the same inflection in his voice the entire time. It's only during the last ten minutes do we see Academy Award Winner Anthony Hopkins and 5 of those are CGI. Blunt is good but doesn't really do anything...except by Victorian era hot and do what her script tells her to do. Good job but a little more effort maybe. Then Weaving comes in and everything's better.
Sadly I can't recommend this movie to anyone. It's a waste of money, boring, predictable, poorly acted (except Weaving) and uninteresting. Skip this one.
MY VERDICT: AVOID IT (only because of Weaving should you see this)
Posted by xTJMac510x at 11:33 AM