They're not hunting us. We're in the middle of a war. It's time to pick a side. 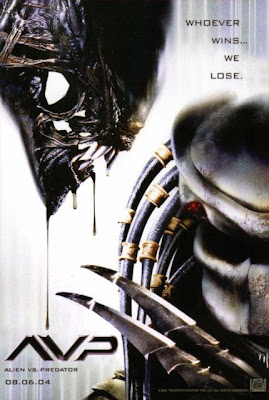 Hello I am the movie encyclopedia and if no one else will see it, I will.
Anyone who loves sci fi thrillers will know that you can't get much better than the Alien and Predator series. Predator set a standard for action thrillers and redefined the idea of a monster movie and the alien series showed us how awesome Lawrence Henrickson and Sigourney Weaver are. Well that and they created probably the scariest sci fi films ever made. So in the mid 2000s when I heard they were combining the two I was ecstatic! Freddy vs Jason was amazing (compared to their most recent iteration) and the video game AvP was and still is a staple of great sci fi survival horror gaming. But for some reason Paul W.S Anderson just couldn't get it right. It's not that AvP sucks (to some it does but the first one's not bad) but it's just terribly underwhelming compared to the great series they came from.
The story is pretty simple: A group of scientists lead by Weyland from the Aliens series goes into an underground cave area in search for why there was a spike in the heat temperature. When they get there however they realize that they just stepped into the middle of an all out Alien vs Predator war and if the humans get in the way than they die. It doesn't really get more complicated then that and honestly for this kind of movie do you really want it to be extremely deep? Probably not.
The acting is mediocre at best but realistically all any fan of the show cares about is Weyland. Besides that the rest of the cast is basically fodder. The effects are nice but they can be wonky sometimes and the aliens don't really feel natural. Not that they were natural or anything but it just caught me off guard at how fake they looked. The predators look good but seem very subdued in the movie. I blame that on the film's PG-13 rating as well as its idea that the Predators are good guys (WTF?). The action scenes are okay but like everything else very subdued. It was just a run of the mill sci fi horror when you got down to it. A few jump scares but basically kind of dull compared to their original sources.
Overall this movie could have been much better but for some reason Paul WS Anderson felt the need to bring the AVP universe to the younger crowd. Bad decision on his part because this could have been an awesome movie. It's not bad for what it's worth but definitely forgettable.
MY VERDICT: RENT IT

Email ThisBlogThis!Share to TwitterShare to FacebookShare to Pinterest
Labels: Rent it, sci-fi