These are desperate times, Mrs. Lovett and desperate measures are called for... 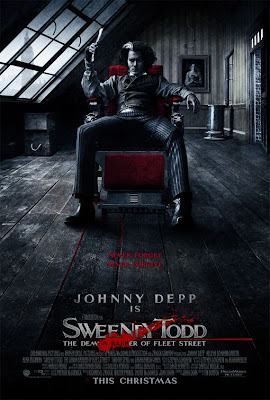 Hello I am the movie encyclopedia and if no one else will see it, I will.
A recent conversation on the LAMBcast involving remakes got me to thinking of some of my favorite remakes. I've already reviewed Dawn of the Dead and the Crazies but I think it's now time to review one of my favorite remakes that also happens to be a Tim Burton movie-Sweeney Todd.
It's hard for me to admit I'm a Tim Burton fan and for good reason. While Tim Burton is very visually masterful he also can co over the top on most occasions which does turn a lot of people, myself included, off. That doesn't mean that he makes bad movies by any means but he's one of those you gotta love him or hate him kind of directors. Me personally I enjoy select works of his and one of my favorite Burton films ever is this one Sweeney Todd: The Demon Barber of Fleet Street. I've always been a sucker for musicals and because of my theater background I've always been a sucker for Broadway musicals. My favorite Broadway musical ever is Sweeney Todd. The visceralness and the lyrics and the songs and the story all just grab me in. A twisted tale of redemption by a demented barber on a hellbent quest to get back at all those who burdened him and took him away from his wife and child. There is just something so wonderfully twisted about that.
It was hard for me to swallow the cast being what it was and especially considering it was a musical but overall I was quite surprised at how good the cast is. Johnny Depp is short of sheer brilliance and his voice is actually quite good. Alan Rickman makes a great villain and Helena Bonham Carter is quite good as well. Overall the sound and musical numbers as well as the acting all work together quite well.
In my opinion nothing will ever beat seeing the original but as far as movie versions this one is quite good. If you were skeptical before give this one a look.
MY VERDICT: OWN IT
Posted by xTJMac510x at 10:30 PM

Email ThisBlogThis!Share to TwitterShare to FacebookShare to Pinterest
Labels: drama, musical, Own it