"What are you doing in my apartment?!" "Blowing your mind!" 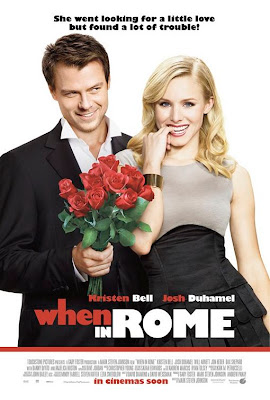 Hello I am the movie encyclopedia and if no one else will see it, I will.
Wow another romantic comedy where an independent woman meets a funny hunky guy who makes her let her guard down and after an hour and a half they fall in love and live happily ever after but not before going through some hilarious hijinks and physical comedy moments sprinkled in with some serious or sad moments! Excuse me for not giving a damn.
I'm not being fair to the movie. Josh Duhamel and Kristen Bell are good actors and the supporting cast is quite strong (Dax Shepard, Jon Heder, Danny DeVito, Will Arnett, Don Johnson) but it just feels too familiar. Beth is a successful art curator who goes to Rome to attend her sister's wedding. When there she meets Nick, a journalist who is a little goofy and shy but falls for Beth. She goes to a fountain and wishes on it and while there picks up some coins. She returns to New York and is followed by a whole lotta suitors.
It has it's funny moments (Shepard and Arnett mostly) but mostly the film falls flat. The writing is predictable, the plot is uninspired and it's kind of dull. It's been done to death before and honestly I wasn't that interested. A harmless date movie I guess but overall just not that good.
MY VERDICT: AVOID IT
Posted by xTJMac510x at 7:21 PM

Email ThisBlogThis!Share to TwitterShare to FacebookShare to Pinterest
Labels: Avoid it, chick flick