You know, when I was your age, I used to have these awful nightmares. 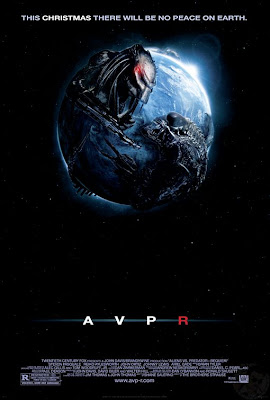 Hello I am the movie encyclopedia and if no one else will see it, I will.
I was really hoping on skipping reviewing this one but I guess since I reviewed the first one I might as well review this one as well. In 2007 for some unknown reason the Strauss Brothers, a relatively unknown brother directing duo, along with a relatively unknown writer decided to take two of the biggest names in Sci-fi horror and make a pseudo sequel to the first Aliens vs Predators movie. Does it have anything from the original like Weyland? No...in fact besides the creatures and one brief joke line of "Get to the chopper (which is butchered)" there is nothing that reminds me of the original movies. It's like Fox said they needed a good horror movie but don't want to pay any big names or create new characters...oh look we have the AVP saga, people like that let's make another movie. And to tell you the truth, while I was glad it used more blood and gore and was more like an R rated movie (like the originals)...I really wish this wouldn't have been made.
Here's the story: a predator with a facehugger is shot out into space and is intercepted by a predator ship. The creature becomes a hybrid alien/predator known as the "Predalien" and kills all the predators on board causing it to crash into a small town in Colorado. The facehuggers and Predalien escape the ship and wreak havoc while a distress signal is sent out to the rest of the universe. An ex-con and a small band of people must escape the town or die trying. The basic premise is set up more as a horror film with people fodder for killing so there is no other real plot besides that.
Yes there IS more action in this one than the first AVP and some would actually enjoy that. Me? I found it all quite repetitive and dull. Any fan of the original movies has seen it all before so why do it again? Honestly I can't figure it out. The kills hold no weight, the effects are laughable and overall the acting and plot are just dull.
The only redeeming value is the Predalien and the fact that there is more violence. Otherwise this is just another dull and boring movie just made to cash in on these two once great franchises.
MY VERDICT: AVOID IT
Posted by xTJMac510x at 9:05 PM