I just got a date with Drew Barrymore. 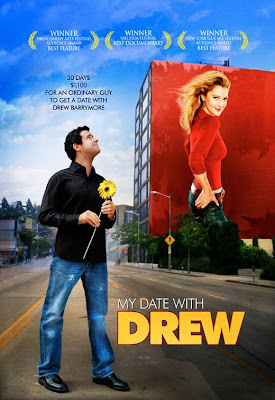 Hello I am the movie encyclopedia and if no one else will see it, I will.
This movie plagued my Blockbuster shelf for months. It stared me in the face and never let me go. No matter what movie I got, my Date with Drew was always right next to it. And when Blockbuster started charging a dollar to BUY the movie I couldn't help but wonder what this movie was all about. Was it a documentary? Was it a romantic comedy? Was it really sad and depressing?
Well it IS a documentary and in a way a romantic comedy but in no way is it sad. Brian, the star, director and writer of this indie drama was born around the same time as Drew. Ever since he could remember Drew was the girl of his dreams. No matter what he just couldn't shake the idea of Drew being the one girl for him. But she is a world famous celebrity and he is just a middle class schmo. So what does he do? He rents a camera and equipment and he takes all the money he has and finds a way to somehow, and in someway get a date with Drew Barrymore.
This movie was shot in a month. You know why? Because Circuit City had a 30 day return policy that he wanted to take advantage of so he didn't have to pay for the camera. So in those 30 days he goes through every single method and way of getting a date with Drew. Some are met with sad results, some are hilarious and some are worth praise. It's interesting to see just how far someone will go for a date with a celebrity. The film also had a wide Internet campaign that was one of the first big Internet launches of a film. This film was spammed so much not only at Blockbuster but all around the Internet that you would be hard pressed not to find this movie somewhere. I think it was a bold move and the movie is good enough to withstand this amount of hype.
The only major disappointment I had with this film was the date itself. He goes through all of this hard work and effort to get a date and when he does its kind of sweet but mostly awkward and you can tell as sweet as Drew is she is a bit uncomfortable at this sweet but borderline stalker.
Overall it's a good documentary and really sweet. It's funny and it shows just how far someone will go to find the one they love.
MY VERDICT: SEE IT
Posted by xTJMac510x at 10:00 PM