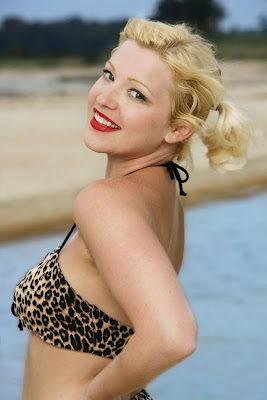 Hello I am the movie encyclopedia and if no one else will see it, I will.
Survivor has been on for twenty seasons now and it's still going strong. So to celebrate twenty years of Survivor they decided to do another All Star Season this time pitting famous Survivor Heroes against famous Survivor villains. For some strange reason my back alley connections have gotten me the ability to interview the contestants that get eliminated so hopefully (I can't always promise) I can get you up to date interviews with all the fallen cast mates.
First up is fan favorite Jessica "Sugar" Kiper from Survivor: Gabon who was famous for being the bubbly, cheerful pin up girl who surprised everyone by coming in third. Sadly though, even after a valiant effort in the reward challenge even going so far as to lose her bra, her emotions and her flirtatious nature got the best of her and thanks to Colby she was the first one to go. So without further ado here is the interview:
The Movie Encyclopedia: Hello Sugar Thank you for doing this interview
Sugar: No problem.
TME: A question that seems to be on everyone's mind is WERE you hitting on Colby during that first night?
Sugar: Only for the sake of the game. I had no romantic feelings for him. I mean I'm not single, I'm with someone right now!
TME: Alright. How does it feel to be considered a Survivor Hero?
Sugar: It felt like a mislabeling...lol I felt kind of bad.
TME: How's it like playing with other Survivors?
Sugar: It's VERY HARD
TME: Did you know you were going home first?
Sugar: Yeah...I knew...
TME: Do you think because you shared your emotions when you lost is the major reason why you went home?
Sugar: No but I don't think it helped
TME: Colby seemed to play a huge part in your going home it seems
Sugar: Yeah it appears that way
TME: So why DO you think you went home?
Sugar: Because someone had to go and apparently I was weak and annoying
TME: So who got on your nerves the most?
Sugar: I was most annoyed at myself actually lol.
TME: Do you have any regrets?
Sugar: Regrets...I have a FEW lol
TME: So who do you think will go home next?
Sugar: Cirie...or someone that the group has targeted. Probably someone from Micronesia
TME: Speaking of do you and Corrine talk much?
Sugar: We've bumped into each other a few times. Same goes with Cirie and Amanda and really anyone from Micronesia.
TME: So do they send you right back home when you get voted off?
Sugar: No you stay out there the entire time.
TME: During that first challenge what was going through your mind?
Sugar: "I need to do something good!"
TME: Do you regret rolling out of your bra?
Sugar: No actually I don't regret that at all
TME: Who do you want to win?
Sugar: Tom. I admire him the most out of all of them.
TME: So how do you feel about Randy?
Sugar: I like Randy. I think he's funny and if he has the potential to make everything more interesting (laughs)
TME: Alright then who is your favorite villain?
Sugar: Coach
TME: What do you think his chances are?
Sugar: I think he'll go far.
TME: So what's your opinion on Russell? How much do you know about him?
Sugar: I think he's psychic...and possibly crazy. They didn't tell us much about him except that he was on the last season and had done something worthy of him being brought back.
TME: Who do you think was left out this season?
Sugar: Todd Herzog...he should have been there.
TME: What are you allowed to bring with you to the island? Do you have any advice for future cast aways?
Sugar: Just basic stuff and be sure to mentally prepare even more so than you expect.
TME: So how's life outside of Survivor? We know your a pin up girl. What made you want to do that?
Sugar: I just like the retro look to be honest with you.
TME: Do you do anything else? Sing maybe?
Sugar: Yes actually I have a band called "She Loves Betty White." It's an alternative band and I play the drums and sing.
TME: Do you have any pets?
Sugar: I have two: Major P. Pants, who is usually nicknamed Maj or Major and my new puppy Misty.
TME: Why Major P Pants?
Sugar: Because he pees whenever he sees anyone.
TME: Do you like being a reality TV star?
Sugar: I'd honestly rather just be a regular TV star.
TME: This is my first interview with a Survivor so I must ask a burning question that I have had for a while. Is it true that the show is taped ahead of time and what we see is just the recording. Like the winner has already been chosen and everything?
Sugar: No actually they cloned us and those are our clones out there right now on the island. Mine didn't do to well it looks like.
TME: I knew it haha. So I have one last question. You seem to really like Tom and Coach but who do you think is more likely to win Survivor: a hero or a villain?
Sugar: Villain probably because they are nastier but I'm pulling for my old tribe of the heroes.
TME: Thanks again for your time and participation!
Sugar: Thank you.
Tune in next time to see if I can get an interview with the next eliminated contestant. And be sure to check out blogcabins.blogspot.com for the latest Survivor recap and play by play. Until Next time.
Posted by xTJMac510x at 2:33 PM