Let's remember those three words we all love to hear: Let's...Get...Naked 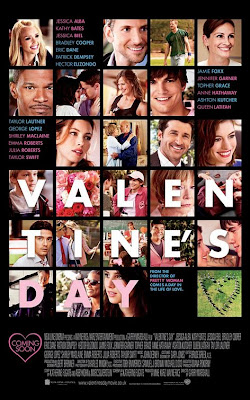 Hello I am the movie encyclopedia and if no one else will see it, I will.
Gary Marshall has been an interesting director for me. I like him but I don't exactly love him. He was a great writer for "Happy Days" and I love Pretty Woman but he hasn't really reached that greatness of Pretty Woman ever since. Granted The Princess Diary films were good but that was because of newcomer at the time Anne Hathaway...not Gary Marshall. Well since Love Actually was apparently too British for people, Gary Marshall, along with Katherine Fugate (creator of Army Wives) created a pseudo Love Actually based on a holiday nobody actually cares about and put about almost every actor not busy at the time and looked good in it.
To tell you the plot would be a mindblowing experience. To say the least its a hodgepodge of different plots all going on at the same time that connect in some weird 6 degrees of Kevin Bacon kind of way. There are two florists, a teacher, an agent, a PR person, a sports newscaster, a mailboy, a football player, a soldier, a business man, an old couple, two young couples, a hopeless romantic, and a phone sex operator. I'm probably forgetting a bunch of things but forgive me for that. Basically all the stories revolve around the love or hate of Valentine's Day and all the things people go through on that day. The story is your usually sappy, cheesy, corny, hokey, funny, happy, aww inducing, romantic comedy stuff that we usually see. But honestly I kinda liked it. It's harmless, no real groaner moments, kind of goes out of the way to be different and in the end is just an average funny film.
I can't really comment on the acting that much unless you want nine pages of description. Basically they all do there job fine with a few stand out performances. Jennifer Garner, Jessica Biel, Jamie Foxx, Hector Elizondo, Topher Grace, Bryce Robinson and Taylor Swift all stand out as being above average with Robinson and Garner pretty much going above and beyond everyone else. I actually appreciate Swift's ability to make fun of herself and if your wondering No Taylor Lautner still can't act and no he doesn't take his shirt off. The only lackluster performance was probably Jessica Alba who was kind of painful to watch. And despite what people say, Ashton Kutcher wasn't bad.
Overall it's an average movie with a sappy sweet plot. A good date night film and at least worth a rent.