Hip-hop is the unwanted bastard son of superior musical forms like jazz and blues. 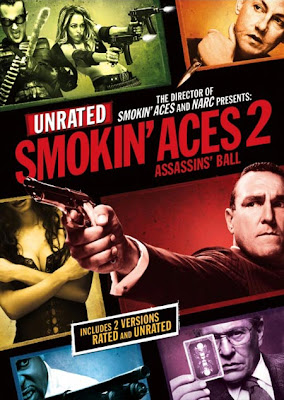 Hello I am the movie encyclopedia and if no one else will see it, I will.
As you all may know I am a huge fan of the original Smokin Aces. It's an awesome, over the top action film that doesn't take itself too seriously and is brilliant for it. It remains one of my favorite guilty pleasures of all time. But what happens when you decide to make a prequel, cut half the budget, get rid of half the actors and make them all (except Soot) total jerks? You get a movie that HAD potential but blew it because they wanted to cash in on a great franchise.
The sad thing first off is that there actually is a story. The first one got away with just having a set up and character development and then boom boom boom until the end of the movie. Not so the case with the second one. It's the same idea, one target, a bunch of assassins but this time the target knows he is being targeted and hires his own assassins and there's political backstabbing and clown bombs and badly done mexican stand offs but the result is the same. Whereas the first was just funny and entertaining because it didn't take itself seriously, this one TAKES itself seriously and thusly makes everything kind of stupid. Then you have the nerve to get rid of almost the entire cast from the first one including Reynolds, Liotta, Pine, Affleck, Garcia and Durand and then get rid of the great Clint Mansell, the great composer, Joe Carnahan is reduced to a producer and the only good thing about this movie is the return of Lazlo Soot.
The acting, except for Jones and Soot, is abysmally bad and way over the top, the action is too chaotic, makes no sense and the CGI is really weak. The directing and cinematography makes it look home made and overall there is not much to like about this film.
This is a sad tragedy of a film series. The first one was a great film that remains one of my all time favorite guilty pleasures. The second one is a complete sell out of the series and really shouldn't have been made.
MY VERDICT: AVOID IT
Posted by xTJMac510x at 12:28 PM