For out of the ground we were taken from the dust we are, and to the dust we shall return! 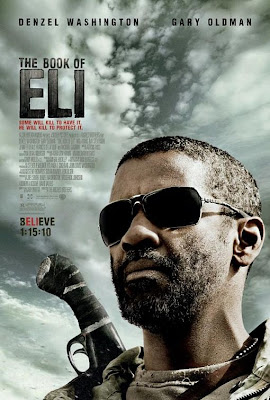 Hello I am the movie encyclopedia and if no one else will see it, I will.
I still don't get it. Why are we so obsessed with the Apocalypse and what happens afterward? Does it really matter since most of us will be dead? I guess in some respects its interesting to see a more simple time with modern weapons and its pretty cool to see what all will come out of it but this obsession is almost as bad as vampires. We have the Fallout series of video games, we have movies like Tank Girl, The Road, The Book of Eli, Doomsday, Resident Evil and countless numbers of books. The difference I think though between this vampire craze and the Apocalypse craze is that the Apocalypse movies are actually good 90% of the time which means they warrant more being made.
This newest one The Book of Eli is a masterpiece. Granted it has flaws (no movie is perfect) but it is damn near close. Directed by The Hughes brothers who are probably best known for From Hell and Menace to Society and written by Gary Whitta (a god amonst gamers for writing the Gears of War games, the Duke Nukem series, Prey and starting PC Gamer magazine) this film is amazing from start to finish. Whether its the action, the cinematography, the story or the style, it all works.
The story of Eli takes place in the post apocalyptic world sometime in the future. Most of the people died in the blast but those who remain either became hijackers/scavengers, cannibalistic or live in one of the few shanty towns they got left scraping for food and water. Eli (Denzel Washington) is a solemn, quiet man who has one goal: walk west. He has been traveling for 30 years and still has yet to reach his destination. But just because he is older doesn't mean he can't put up a fight. He carries around a loaded pistol, a shotgun, detachable bow and arrow and a huge machete, all of which he isn't afraid to use. One day he is brought to a town run by a man named Carnegie (Gary Oldman). He takes a liking to Eli but starts hunting him down when one of the barmaids Solara (Mila Kunis) tells him that Eli is carrying around a bible. Carnegie wants the bible and will stop at nothing to get it.
The plot goes on (it IS a 2 hour movie) but to go any further would reach spoiler zone and this is one movie you DO NOT want spoiled. There is some great twists in this movie that actually warrant a second viewing. And its a movie I'd happily sit through again. If not for the new perspective gained by watching the film once than because of the brilliant cinematography and great writing.
What seems to put off most critics it seems is the idea of religion in the movie. Unlike some movies that get huge gripes for being religious, I just don't see it as a problem in this movie. They never shove religion down your throat or say that Christianity is the only way. All it ever is Eli quoting the Bible before he kicks some ass (where I got the quote from) and two prayers he does one of which is used as a plot device to kick the movie into high gear. And if people have problem with quoting-

then this scene would be more highly controversial. Nobody until recently had problems with quoting so I don't see it as a problem now. As for the other non plot device prayer it never really takes away from the movie. And seeing as how the religious aspect seems to confound people the most, I'm here to say that it is NOT an issue or should even be considered an issue for this movie.
All in all The Book of Eli is a great Mad Maxish sci fi action thriller that is a thrill to watch from the first minute to the last minute. This will remain as one of my favorites for the year and considering this is January it gives me high hopes for the other films this year.
MY VERDICT: TOP FILM
Posted by xTJMac510x at 3:32 PM